Nograles: There was ’miscommunication’ in Robredo impeachment complaint 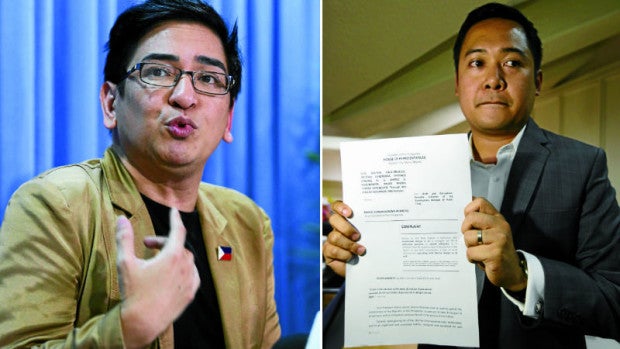 Rep. Jericho Nograles of the Puwersa ng Bayaning Atleta (PBA) party-list said on Wednesday there was a “miscommunication” between his camp and the group of lawyers seeking his endorsement for their impeachment complaint against Vice President Leni Robredo.

In a statement, Nograles said he has accepted Bruce Rivera’s apology about the aborted impeachment complaint which had Nograles’ name as endorser even though he had not given his consent.

“I accept the apology of Atty. Bruce Rivera who admitted that the brouhaha about the impeachment complaint against Vice President Leni Robredo. (It) was a result of miscommunication,” Nograles said.

Nograles said Rivera’s admission validated his position that he had not been informed about his supposed endorsement of the complaint.

“His admission that this was a case of miscommunication validates my position that I had no prior knowledge about this complaint,” Nograles said.

The group of lawyers led by Rivera, who once served as counsel of alleged pork barrel scam mastermind Janet Lim Napoles, went to the office of Nograles with the complaint containing Nograles’ name. But Nograles denied agreeing to be the endorser.

READ: Who is Bruce Rivera?

Reporters waited Tuesday for the expected filing of the impeachment complaint at the House secretary general’s office. Nograles later faced the media and denied he agreed to endorse the complaint.

Rivera said it was a clear case of miscommunication.

“We were informed that Congressman Jericho Nograles of the PBA Partylist issued a statement accusing Trixie Cruz-Angeles and myself with misrepresentation for including his name as endorser in the impeachment complaint,” Rivera said.

“This was perhaps a result of a miscommunication,” he added.

Rivera said the group did not intend to misrepresent Nograles and that it included Nograles’ name in the impeachment complaint to make the filing of complaint easier.

“The truth of the matter is, we were told to give a copy of the complaint to him for his perusal,” Rivera said. “Atty. Trixie, in good faith, included his name so if he decides to be one of the endorsers, it will be easier to just affix his signature and if not, his name will be removed in the complaint.”

“There was never any intention to misrepresent,” he added. “In fact, the impeachment complaint submitted to other members of the House did not include his name anymore. In fact, we never mentioned his name in our press conference until some reporter raised his name.”

Rivera extended his apologies for the miscommunication to Nograles.

“Thus, we apologize to Congressman Jericho Nograles for this unfortunate situation,” Rivera said. “We truly understand that the job as legislator is a daunting task and we will never intend to make his already difficult job, more difficult.”

Rivera earlier said the group accused Robredo of the offenses of betrayal of public trust, culpable violations of the Constitution, and graft and corruption.

Rivera said Robredo betrayed the public trust in her video to a United Nations body criticizing the Duterte administration’s brutal war on drugs, and the alleged “palit-ulo” scheme of the police.

Rivera said Robredo’s claims against the administration and the police were “reckless, accusing the vice president also of misdeclaring her assets in her statement of assets and liabilities networth by not disclosing the worth of her shares in Meralco.

Complaints against Robredo gained traction since Speaker Pantaleon Alvarez, Duterte’s staunch ally in the House, raised the specter of impeaching Robredo for her message to the UN body.

Alvarez vowed to pursue Robredo’s impeachment even though Duterte himself rejected the move.

Duterte also faces two impeachment complaints filed by Magdalo Rep. Gary Alejano regarding the president’s alleged role in state-sponsored killings and the Davao Death Squad, as well as his alleged inaction to uphold the country’s sovereign rights over the West Philippine Sea, Panatag Shoal and Benham Rise amid the administration’s cooling of ties with China.

Duterte, Alvarez and other key allies also face a complaint for crimes against humanity before the International Criminal Court in The Hague. /atm

Duterte, 11 others accused of crimes against humanity before ICC