Alejano filed the complaint at the House of Representatives Secretary General’s office, making good his threat to seek Duterte’s ouster for the impeachable offense of bettayal of public trust and culpable violations of the Constitution over his alleged secret sweet deals with China and other aspects of his foreign policy.

READ: Chinese incursions may be part of supplemental impeachment complaint

(In fact, our view is President Duterte bit the bait of China and fell into its trap.)

Alejano added that Duterte committed dereliction of duty for his inaction and his failure to assert the country’s sovereign maritime and territorial rights on Benham Rise, Panatag (Scarborough) Shoal and the rest of the West Philippine Sea in the South China Sea.

Alejano said the President seems resigned to give up the country’s maritime rights in exchange for loans and investments from China which would further put the country in debt.

(The President is decided that we can no longer do anything. Before anything even begins, the President has given up. This is in exchange for short term investments and loans. In the end, we will be cornered and tied up with debts.)

The former Marine captain filed the supplemental complaint on top of his first impeachment complaint against Duterte for betrayal of public trust, culpable violation of the Constitution, bribery, and other high crimes due to this administration’s bloody war on drugs and the vigilante death squad when Duterte was Davao city mayor. 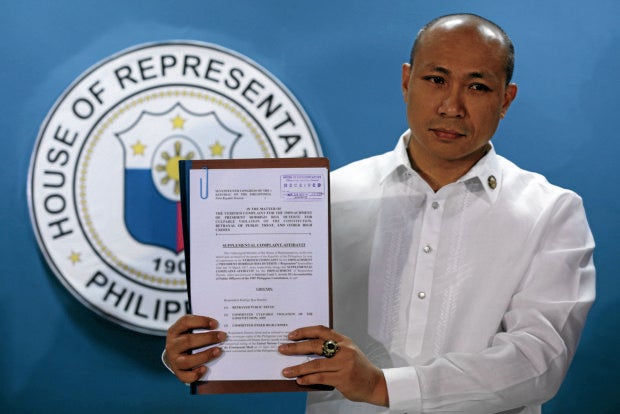 Alejano earlier chided Duterte for not using the jet ski he promised during the campaign to use to plant a flag on the disputed waters to assert the country’s maritime rights.

Duterte later clarified his remark was mere hyperbole, saying he could not swim.

The President in his speech in Myanmar dared the former marine captain to be the one to lead a war against China over the disputed waters.

Duterte earlier said he could not do anything to stop China from building structures on Panatag Shoal, amid reports China is building an environmental monitoring station there.

Alejano in an earlier press conference maintained that the country should use the favorable United Nations arbitral decision to assert the country’s maritime rights over the resource rich West Philippine Sea and even the Benham Rise, a biodiversity hotspot east of Luzon where recently Chinese ships had been spotted allegedly looking for submarine stations.

Lawmakers earlier urged Duterte to be transparent about his deals with China, amid reports Duterte had an arrangement with China to allow its surveillance ships in Benham Rise.

The United Nations in 2012 declared Benham Rise as part of the Philippine continental shelf. IDL/rga

Duterte urged to be transparent in dealing with China