Magdalo Rep. Gary Alejano filed the impeachment complaint before the Secretary General of the House of Representatives, who would determine if the form and substance of the complaint is sufficient to have the President impeached.

It remains to be seen if the impeachment complaint would survive the lower house dominated by a supermajority of allies of the administration.

In a press conference, Alejano said Duterte should be impeached for bribing the vigilante squad Davao Death Squad to kill drug pushers and users when he was Davao city mayor and at the height of his administration’s war on drugs.

(The biggest reason here is the state policy of killing drug offenders, the killing of Filipinos without going through the democratic process that is currently in place.)

Duterte, he said, should also be impeached for graft and corruption for alleged ghost employees when he was Davao city mayor, and a P2.2 billion alleged hidden wealth in his bank transactions which was not declared in his Statement of Assets and Liabilities Networth (SALN).

(For graft and corruption, included here are his bank accounts. In total, he has P2.2 billion which he did not declare in his SALN.)

“Layon namin sa reklamong ito na maging behikulo para sa ating mga kapwa Pilipino na magkaroon ng boses ng pagtutol at paglaban sa mga abuso at krimen ni Pangulong Duterte (Our aim is for this complaint to serve as a vehicle for our fellow Filipinos to have a voice of dissent in fighting the abuses and crimes of President Duterte),” Alejano said

In the impeachment complaint, Alejano alleged that Duterte committed acts of murder when he publicly endorsed the killings of drug suspects at the height of this administration’s anti-narcotics drives “Oplan Tokhang” and “Oplan Double Barrel” which have left over 8,000 dead.

“Contrary to his oath of office and to the Constitution and prevailing laws, Respondent Rodrigo Roa Duterte publicly adopted a policy of promoting, encouraging, as well as aiding and abetting in the extrajudicial killing of persons suspected of being drug-pushers, drug-users and/or committing other crimes,” the complaint read.

The complaint also cited the testimonies of self-confessed Davao Death Squad (DDS) members Arthur Lascañas and Edgar Matobato, who claimed to have killed criminals on Duterte’s orders when the latter was Davao city mayor.

Duterte may be held liable for bribery and murder for allegedly ordering the DDS to kill over 1,400 persons when he was Davao City mayor, the complaint read. 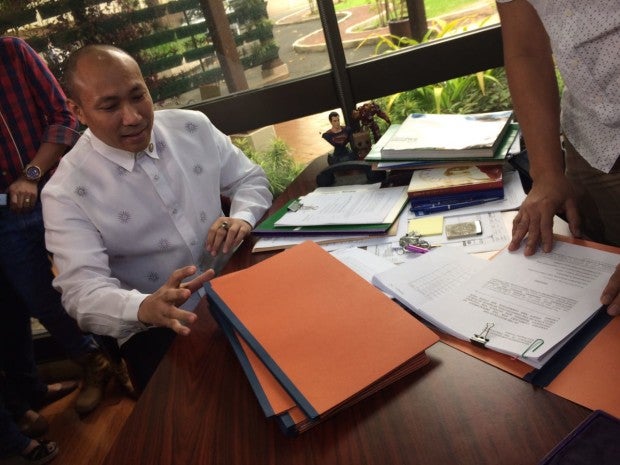 “As testified to by Matobato and Lascañas and as will be affirmed by other witnesses against him, respondent Duterte offered and gave, by himself and through his subalterns, prize money, rewards and/or bounties for the killing of suspected drug lords, drug users and other crime suspects, as well as personal and political enemies,” the complaint read.

The lawmaker said Duterte should also be held liable for graft and corruption over a Commission on Audit (COA) report that 11,000 contractual employees in Davao city were “ghost employees” when he was mayor in 2014 that cost government P708 million.

The budget for these ghost employees was allegedly used to fund the monthly allowance or “pakurat” of the DDS members, the complaint read.

The complaint also cited the bank documents handed to Senator Antonio Trillanes IV about the alleged “secret bank accounts” of Duterte which he failed to declare in his SALN.

The bank transactions showed that the amount of P360 million was deposited in the bank accounts of Duterte’s children Sara (now Davao city mayor), Paolo (now vice mayor), and Sebastian, and another P187 million in the bank account of his common-law wife Honeylet.

The complaint also cited the alleged 50 unreported properties in the names of Duterte and his children.

Duterte’s wealth worth P2.2 billion was grossly disproportionate to his salary as mayor, the complaint alleged.

“Having committed all of these acts, Respondent Rodrigo Duterte has not only committed graft and corruption and other high crimes, which constitute specific grounds for his impeachment from office, he has also undermined the integrity of the Office of the President, has brought disrepute on the Presidency, and has acted in a manner subversive of the rule of law and justice,” the complaint said.

In a press conference, Alejano denied being behind a destabilization plot against the president, adding that Duterte should be held liable even for his alleged crimes when he was mayor.

(We don’t want the country to accept killings as something legal in this country.)

Alejano said he has braced himself for possible arrest, following the detention for drug-related charges of Senator Leila De Lima, a vocal critic of the administration.

(Even as soldiers, we have fears too. But our desire to serve the nation prevails.)

“That’s a tall talk. But we’re confident that were going to have the numbers,” Alejano said.

Speaker Pantaleon Alvarez has called the complaint an act of “stupidity” and lacking in form and substance, while Majority Leader Rudy Fariñas downplayed the complaint for being insufficient and reliant on news reports.

The majority leader added that the complaint contained mere “hearsays,” and that Duterte could not be impeached for his acts before his presidency

“The allegations made in the complaint are obviously not of his own knowledge since most of them are palpably hearsay either from what he read or saw on the news or from tales of Sen. Trillanes. Finally, most of the allegations were allegedly committed when Pres. Duterte was mayor or vice mayor. An official is impeached for acts committed in his present office,” Fariñas said in a text message to reporters.

According to the 1987 Constitution, the ouster of impeachable public officials would emanate from the lower House, where the justice committee would first determine if there is form and substance on a verified impeachment complaint.

Once it hurdles the committee level, an impeachment complaint would need one third vote of all members of the 292-strong lower House before it is transmitted to the Senate for the formal impeachment trial. The Lower House would constitute the prosecuting panel.

Alejano filed the impeachment complaint as he earlier denounced the entry of Chinese ships in Benham Rise, a 13 million-hectare mineral-rich undersea region east of Luzon, urging Duterte to fight for our country’s territorial rights instead of making sweet deals with China.

Alejano said Magdalo will study the possibility of filing a supplemental impeachment complaint over Duterte’s sweet deals with China. IDL/rga