De Lima reflects on risks she took: ‘No regrets’ 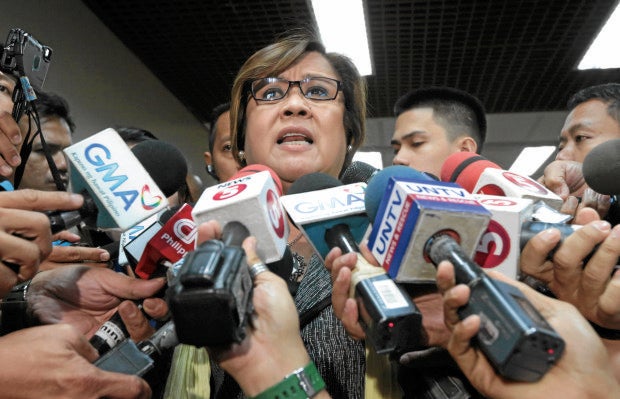 When she publicly admitted her past relationship with former driver Ronnie Dayan, detained Senator Leila de Lima knew that people would not understand her and judge her negatively.

But she had no regrets, De Lima said.

After being in detention for more than a month now, the senator has realized the many risks that she has taken that eventually landed her in jail

De Lima was arrested and detained at Camp Crame last February 24 for her alleged involvement in illegal drugs.

“I believe in honesty and authenticity. I abhor superficiality, pretensions and hypocrisy. What you see is what you get,” the senator said.

She said she took a risk when she ran for the Senate during the 2016 May elections “despite very meager resources” and her “vulnerability to retaliation or vendetta from powerful personalities who might have felt “wronged by my official actions in previous capacities.”

De Lima was justice secretary before she won a seat in the Senate.

At the Senate, she said, she took a risk when she initiated a Senate inquiry on the spate of killings of suspected drug offenders “ignoring the contrary advice of well-meaning friends who deemed such initiative of mine as suicidal” given President Rodrigo Duterte’s high popularity and “patent intolerance to dissent.”

“I took a risk when I publicly admitted a previous relationship, knowing that people would not understand it and would thus judge me negatively about such episode in my personal life,” De Lima said.

She was apparently referring to Dayan, whom she earlier admitted having an affair with.

Like De Lima, Dayan was also arrested and detained for alleged drug links.

“I took a risk when, rather than heeding suggestions to seek political asylum in a foreign country, I chose to face head-on my persecution and consequent illegal arrest, boldly proclaiming to the whole world that I’m honored to be a prisoner under this repressive regime,” she said.

“No regrets. Being honest with oneself is far better than losing one’s soul,” the senator added.

De Lima has repeatedly denied allegations that she was in anyway involved in the illegal drug trade. IDL/rga