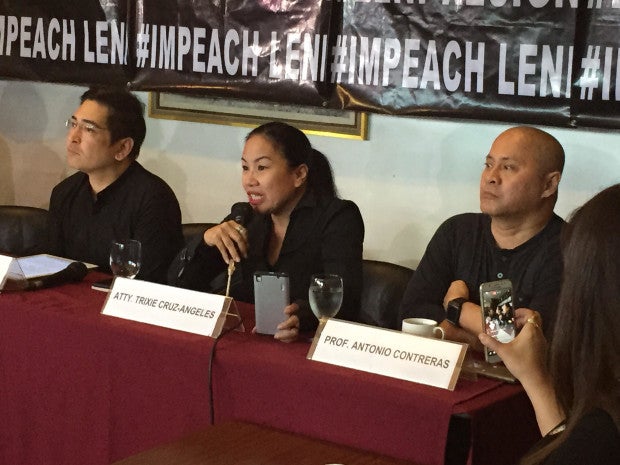 A group of lawyers and professors on Thursday said they are mulling to file an impeachment complaint against Vice President Leni Robredo, but they denied they were doing so as “blind followers” or “minions” of President Rodrigo Duterte.

Rivera said the Vice President committed the impeachable offenses of betrayal of public trust, culpable violation of the Constitution and other high crimes.

Rivera served as a lawyer in the serious illegal detention case of alleged pork barrel scam mastermind Janet Lim-Napoles for which she was convicted.

“It appears that not only has she continued unabated actions detrimental to the Filipino people, but she seems to be stepping up her ante using her position as Vice President to peddle lies,” Rivera said.

“Leni Robredo has gone too far,” he added.

Rivera denied they were “blind followers” or “minions” of the President, who himself thumbed down any impeachment against Robredo, saying her criticisms form part of her freedom of expression.

“We’re not blind followers. If we see Leni Robredo should be impeached against the will of President, then we’ll do what we have to do,” Rivera said.

Rivera said the lawyers are not doing the case build-up against Robredo only because they are supporters of Duterte.

“We have a reason to file an impeachment complaint against Leni Robredo. It’s not bwelta (retaliation),” Rivera said.

Atty. Cruz-Angeles said their impeachment complaint has the backing of some representatives. She refused to name them.

Angeles was earlier suspended by the Supreme Court for three years for violation of the Code of Professional Responsibility for receiving legal fees for an annulment case without filing the petition.

The lawyer said Robredo may also be impeached for spreading “fake news” in her video to the United Nations about the supposed “palit ulo” scheme” in the Duterte administration’s violent crackdown on drugs.

For his part, Department of Interior and Local Government Assistant Secretary Densing said he wanted Robredo impeached not on his official capacity, but he lamented the effect on grants and loans from the international community because of Robredo’s video to the United Nations.

The group said they would file the impeachment complaint with the backing of some representatives when Congress resumes from its break in May.

Impeachment moves against Robredo gained traction since Alejano filed an impeachment complaint against Duterte for the latter’s alleged hand in the vigilante killings by the Davao Death Squad and the spate of extrajudicial killings at the height of his administration’s war on drugs, as well as his alleged P2.2 billion hidden wealth.

It was Speaker Pantaleon Alvarez who first led criticisms that Robredo was behind Duterte’s impeachment, noting that the filing of Magdalo’s impeachment complaint coincided with her message to the UN.

Alvarez said he would push through with Robredo’s impeachment, even though Duterte rejected the move.

In her video to the UN, Robredo exposed the alleged “palit ulo” scheme where poor families were rounded up by the police who would then demand that relatives would be taken in exchange for the accused drug personalities if the latter were missing.

The first impeachment complaint against Robredo was endorsed for the Speaker’s support by Marcos loyalists Oliver Lozano and Melchor Chavez. IDL