Impeach Leni bid has no endorser 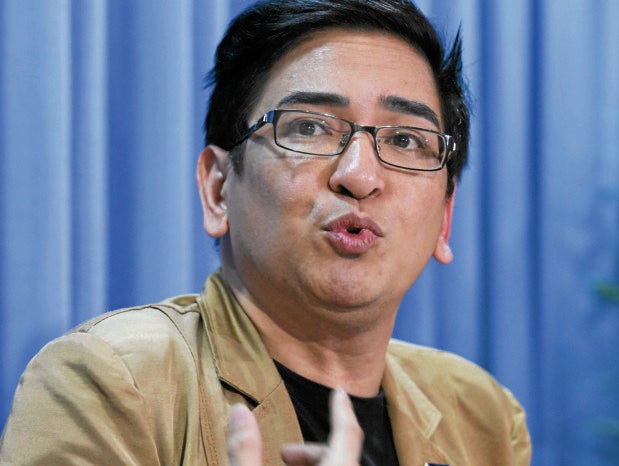 No member of the House of Representatives came forward on Tuesday to endorse the impeachment complaint filed by a group of lawyers against Vice President Leni Robredo, in the second attempt to unseat her in two months.

The complaint accused Robredo, among other things, of betraying the public trust when she delivered a recorded speech at a United Nations side meeting criticizing the Duterte administration’s war on drugs.

Facing the House reporters, lawyer Bruce Rivera, one of the complainants, insisted that the complaint was “received” by a congressman but would neither identify him nor explain why the filing did not take place as announced.

Under the 1987 Constitution, an impeachment complaint may only be filed by a non-House member if it is endorsed by a lawmaker.

“Think all you want. You can make it look like that,” Rivera said in reply to persistent questions about whether his group experienced difficulty in finding a House member to endorse the complaint.

“When we were forming it, [the congressman] already reached out, saying we should go through with it …. It’s just that we have to be a little circumspect,” the lawyer said.

Later Tuesday, Puwersa ng Bayaning Atleta Rep. Jericho Nograles said he was approached by two lawyers with the impeachment complaint bearing his name without his consent.

“They said they were the complainants of the impeachment complaint against Vice President Leni Robredo. And when presented with the complaint, I was surprised to see my name on the complaint,” Nograles told reporters.

Nograles, brother of Davao City Rep. Karlo Nograles, chair of the appropriations committee, said he told the two lawyers to leave his office because they were using his name without his consent.

He was apparently one of the lawmakers approached by Rivera’s group.

As of Tuesday evening, there were no confirmed takers.

The camp of Robredo said the second impeachment complaint came as no surprise, calling it “harassment.”

“We are expecting them to file the impeachment complaint but from what we’ve heard from them a few weeks ago from their press conference, it seems like [the complaint] has no basis. In fact, they were attempting to crowdsource and do some fishing expedition,” Robredo’s legal adviser, Ibarra Gutierrez, told reporters.

Gutierrez said the Robredo camp was not bothered by the complaint and would rather focus on the “work to which Vice President Robredo was elected.”

“But, of course, we will face it if we have to. But it is clear that this is an attempt to destroy [Robredo], harassment and there’s really no clear basis for it,” Gutierrez said.

Independent opposition Rep. Edcel Lagman of Albay said there were no grounds to impeach the Vice President.

The Black and White Movement said the charges against Robredo “are only valid if free speech is no longer valid,” referring to critics’ claim that she had besmirched the country’s reputation when she spoke about the Duterte administration’s bloody war on drugs at a UN forum.

Rivera acknowledged that President Duterte had publicly repudiated any attempt to impeach Robredo, and that his group was facing an uphill battle in the House, where Robredo served as Camarines Sur representative before rising to the Vice Presidency. 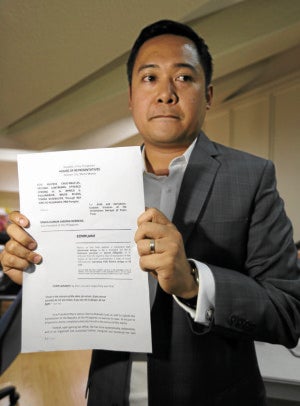 Partylist Cong Jericho Jonas Nograles in an ambush interview in Congress shows copy of impeachement complaint against VP Leni Robredo but denies that he’s one of the complainants in the impeachment complaint. INQUIRER PHOTO/JOAN BONDOC

An impeachment complaint requires the support of at least one-third of the 292-member House of Representatives, or at least 98 votes, before it is transmitted to the Senate, where the respondent will be tried by senators sitting as judges.

Earlier Tuesday, Majority Leader Rodolfo Fariñas said the “Impeach Leni” group should get an endorsement from a House member first before its complaint could be entertained under the rules.

“If those who file later do not get an endorsement, then it’s just a scrap of paper,” he told reporters.

At the briefing, Rivera could not immediately produce copies of the complaint, which he said had about 30 pages, for reporters, as the only validated copy was still with the unidentified congressman.

He, however, gave some details of the grounds cited and the purported evidence against Robredo.

Rivera said the impeachment complaint accused the Vice President of betrayal of public trust, culpable violation of the Constitution, and graft and corruption.

He said Robredo betrayed the republic when she criticized the administration’s war on drugs in a recorded speech at a UN side meeting.

He said the Vice President’s words were “reckless and irresponsible,” noting disavowals by the Philippine National Police and other government agencies of her claims in the recorded message, including the charge about a “palit-ulo” scheme, literally meaning “exchanging heads” of those on drug watch lists with their friends or family.

Rivera also accused Robredo of misdeclaring her assets in her statement of assets, liabilities and net worth, when she put in her shares in Manila Electric Co. as a “business interest” without giving any amount.

He ascribed irregularities to Robredo when she still chaired the Housing and Urban Development Coordinating Council, saying Pag-Ibig funded a convention in the United States that was not about housing but about social empowerment.

Robredo is the nominal leader of the Liberal Party. In December, she quit the Cabinet as housing secretary over policy and political differences with Mr. Duterte, and emerged as a leading opposition figure.

In March, Marcos loyalists Oliver Lozano and Melchor Chavez submitted to the Speaker’s office an impeachment complaint alleging that Robredo betrayed the public trust for her six-minute video presented at the 60th United Nations Commission on Narcotic Drugs annual meeting in Vienna.