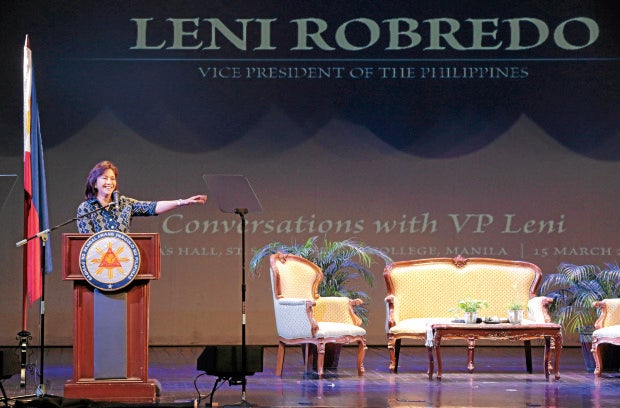 Through a video message, Vice President Leni Robredo brings to the world’s attention the troubles in President Rodrigo Duterte’s war against drugs, primarily the thousands of deaths that have resulted from the bloody seven-month campaign and flagrant human rights violations.

Robredo’s nearly six-minute video is scheduled to be shown on Thursday at the 60th United Nations Commission on Narcotic Drugs annual meeting in Vienna.

“We are heartened that the issue of extrajudicial killings in the Philippines today is being discussed in an event such as this. To know that the international community’s eyes are on us and to feel that human rights advocates are watching over our country gives us comfort, courage and hope,” she said.

“We are now looking at some very grim statistics: since July last year, more than 7,000 people have been killed in summary executions,” Robredo said.

“We agree that our people deserve nothing less than a safe environment, so that anyone can walk the streets safely, whether in daylight or at nighttime. But drug abuse should not be treated as one that can be solved with bullets alone. It must be regarded as it truly is: a complex public health issue, linked intimately with poverty and social inequality,” Robredo said.

Robredo denounced what she called “palit-ulo,” or literally, exchange heads, where another family member would be taken if the drug suspect could not be found.

“Some of those who have told us that when there’s crime, they normally go to the police. Now, they don’t know where to turn. Our people feel both hopeless and helpless—a state of mind that we must all take seriously,” she said.

“You cannot kill addicts and declare the problem solved. The solution is to design the proper health, education and psychosocial interventions to prevent further drug use, and help them transition into a productive member of society,” she added.

Robredo took note of the need now for people who have been traumatized by the war on drugs that need legal and psychological support.

The Vice President reiterated her earlier call for “greater transparency” in the war against drugs.

“What, exactly, is the scope of the drug problem? Why do numbers about the extent of the problem change as officially reported to the nation by our President inconsistent?” she asked.

Robredo said the Commission on Human Rights had received 500 complaints stemming from the war on drugs and had recommended that the Department of Justice file charges against those responsible.

“But until now, seven months into the administration’s drug war, no information has been filed,” she said.

Robredo described as a “brewing problem” and a “huge mistake” the imminent return of the death penalty and the lowering of the age of criminal liability to 9 years old.

She said she had called on Mr. Duterte to focus on the war on poverty, as well, a “war that really matters.”

“In a public statement, we asked him to direct the nation toward respect for rule of law, instead of blatant disregard for it. We ask him to uphold basic human rights enshrined in our Constitution, instead of encouraging its abuse,” Robredo said.

“We asked him to be the leader he promised to be, and evoke in our people hope and inspiration, instead of fear. We told him: Do not allow the lies to distort the truth,” she added.

On Tuesday, Mr. Duterte said the threat to file charges against him would not stop him from carrying out his crackdown on illegal drugs.

“You cannot make me back out of it even if you file a case against me wherever. No way,” he said in a meeting with municipal mayors.

“So the drug campaign will continue …. When will my term end? That will be the day. If you say, you will scare me with the extrajudicial accusation? It’s a good thing that’s only now. When I was mayor, they kept on saying they will have me jailed. You son of a bitch. Just try it,” he added.

He lamented anew that his critics are trying to make the slain drug suspects look like sainted victims.

“And then you will have this drama that someone died like the Pieta …. And so? You will exhibit something like that? That is nothing to me,” he said.  —WITH A REPORT FROM LEILA B. SALAVERRIA