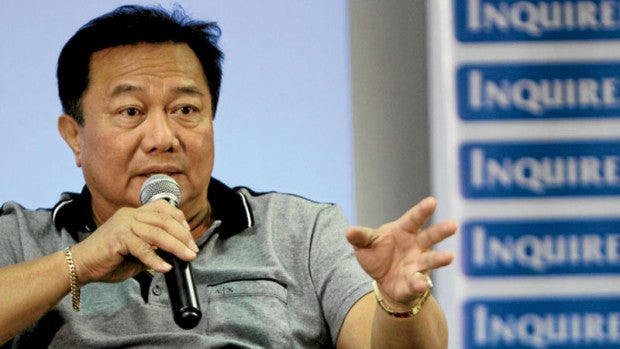 Speaker Pantaleon Alvarez on Thursday said he would still push through with the impeachment of Vice President Leni Robredo even without President Rodrigo Duterte’s support.

In a text message to reporters, Alvarez said the lower house, dominated by a supermajority of administration allies, should also do its mandate under the Constitution.

“We respect the President, but we have to do our duty as mandated by the Constitution.” Alvarez said.

This even though Duterte thumbed down the impeachment of his vice president and said Robredo’s criticisms of his administration’s drug war were part of freedom of expression.

In a separate television interview, Alvarez slammed Robredo for her alleged impeachable offense of taking to the United Nations her criticisms of the administration’s bloody war on drugs.

He said although it was part of Robredo’s freedom of speech to make criticisms, it was “irresponsible” for her to paint a dire picture of the country before the international community.

“Freedom of speech does not exempt an official from an irresponsible act,” Alvarez said.

He said it may be the first time in the country’s history for a vice president to do such an act.

(It may be the first time in our country’s history for us to have an official that shameless. She even sent a video to the UN to destroy our country’s image. Where is her patriotism, her love of country?).

The Speaker said he has yet to hear from a group of lawyers and professors who are mulling an impeachment complaint against Robredo for betrayal of public trust, culpable violation of the Constitution and other high crimes.

Impeachment moves against Robredo gained traction since Magdalo Rep. Gary Alejano filed an impeachment complaint against President Duterte for the latter’s alleged hand in the vigilante killings by the Davao Death Squad and the spate of extrajudicial killings at the height of his administration’s war on drugs, as well as his alleged P2.2 billion hidden wealth.

Alvarez led criticisms that Robredo was behind the impeachment, noting that the filing of Magdalo’s impeachment complaint coincided with her message to the United Nations Commission on Narcotic Drugs blasting the administration’s narcotics war.

In her video, Robredo  exposed the alleged “palit ulo” scheme where poor families were rounded up by the police who would then demand that relatives  be taken in exchange for the accused drug personalities if the latter were missing.

The first impeachment complaint was endorsed for the Speaker’s support by Marcos loyalists Oliver Lozano and Melchor Chavez. IDL/rga