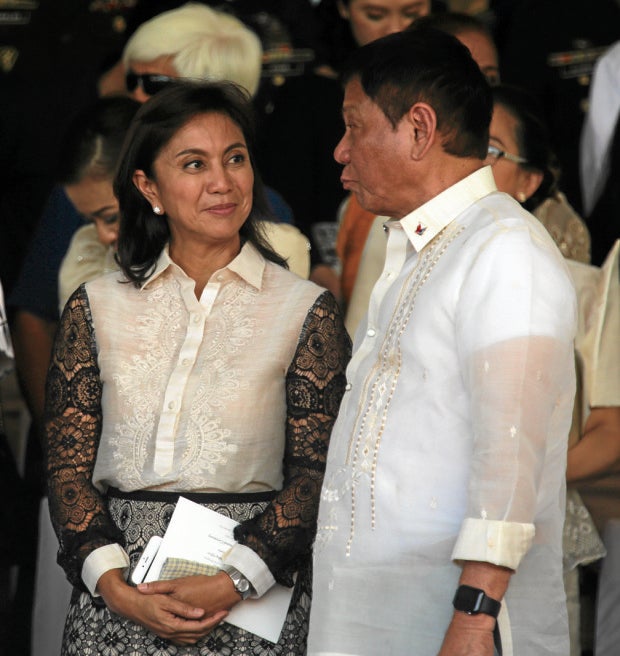 Speaker Pantaleon Alvarez on Friday questioned the legitimacy of Vice President Leni Robredo’s election victory over former Sen. Ferdinand Marcos Jr. as he implicated her in the first impeachment complaint against President Duterte.

In accusing her of having a hand in the impeachment complaint filed by Magdalo Rep. Gary Alejano against the President, Alvarez suggested that Robredo might be concerned about the possibility of a recount of the vice presidential elections.

“Probably she’s worried that when the votes are counted, the votes won’t tally because she knows it’s not true that she really won,” Alvarez said in a television interview.

Sought by the Inquirer to clarify his comment, he said in a text message: “Let us count the ballots first. Why doesn’t Leny [sic] Robredo want those counted? Is she scared that the people will know the true result of the election?”

Robredo, now the interim chair of the Liberal Party (LP), narrowly beat the son of the late dictator Ferdinand Marcos by a little more than 200,000 votes in the May elections.

READ: Robredo to Marcos: Move on

In December, she quit as housing secretary and left Duterte’s Cabinet over policy and political differences. She has since become a vocal critic of the President’s policies, especially on the extrajudicial killing  of drug suspects.

Alvarez, without giving any concrete basis for his accusation, said Robredo was directly involved in Alejano’s move to try to impeach the President on allegations he instigated the killing of 8,000 suspected drug offenders and that he had amassed P2.2 billion in unexplained wealth, among other high crimes.

“Definitely yes. Who will benefit from it?” Alvarez said when asked in the TV interview about the possibility of Robredo playing a role in the first impeachment attempt against Duterte.

Alvarez, a close friend and ally of Duterte, noted that the filing of Alejano’s impeachment complaint came on the heels of a video message Robredo had sent to the United Nations Commission on Narcotic Drugs, in which she criticized the government’s bloody war on drugs.

“It is very clear. We saw that she even sent a tape to the United Nations expressing her complaints against the government,” he said.

On Thursday, Alejano denied that he was being backed by Robredo or the LP, saying he would allow them to decide whether or not to support the impeachment complaint.

Robredo’s spokesperson Georgina Hernandez said there was no truth to Alvarez’ claims,

“The very person who filed the impeachment complaint, Magdalo party-list Rep. Gary Alejano, himself said only the Magdalo group was behind this impeachment, and it’s clear he’s saying VP Leni had anything to do with the impeachment,” she said.

She said Robredo had not even read Alejano’s impeachment complaint yet.

Robredo’s LP ally, Ifugao Rep. Teddy Baguilat, a leader of an opposition bloc in the House, said the Speaker’s allegations were “preposterous.”

“The party was actually caught off guard with the initiative of Gary and Sen. [Antonio Trillanes IV],” he told the Inquirer.

“VP Leni’s criticism of the human rights record of this administration is her right of free expression. Since the administration keeps on denying these allegations and doesn’t seem to take seriously its human rights protocols, VP has to go and ventilate our complaints in other avenues,” Baguilat said.

He said it was only the tactic of the administration to label any criticism as a form of destabilization.

“And an impeachment isn’t destabilization. It’s a constitutional recourse of every citizen,” Baguilat said. IDL/rga