Dayan brought to House of Representatives for custody | Inquirer News

Dayan brought to House of Representatives for custody 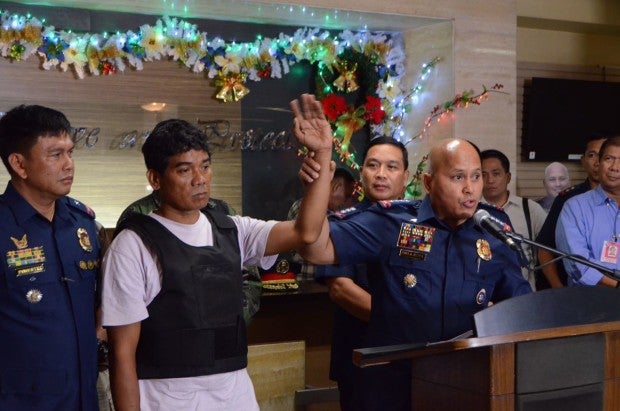 Ronnie Dayan, the former driver, lover and alleged bagman of Senator Leila De Lima on Tuesday night was brought to the House of Representatives where he would be detained after he was arrested for contempt.

Dayan was presented to the media by Speaker Pantaleon Alvarez, majority leader llocos Norte Rep. Rudy Fariñas, and justice committee chairperson Oriental Mindoro Rep. Reynaldo Umali, after he was taken by the police to the lower House before 8 p.m.

After his arrival at the lower House, Dayan was served dinner at the Speaker’s office.

When he was presented, Dayan admitted feeling ill after he was arrested in La Union before noon Tuesday.

Dayan said he would prepare himself for his expected testimony on Thursday. He said Umali promised to give him a lawyer.

House Sergeant-at-Arms Roland Detabali said Dayan will be detained at a secure area inside the House of Representatives complex and taken care of. Dayan was said to have coughs and colds.

Dayan was taken to the lower House which issued the arrest warrant against him for contempt for snubbing the congressional inquiry into the proliferation of drugs at the New Bilibid Prison implicating De Lima.

READ: Dayan will be kept safe in detention – solon

Dayan would be put in a detention room housed in the Legislative Security Bureau building inside the House of Representatives complex until he is asked to testify at the House inquiry.

When he was presented to the media by the Philippine National Police, Dayan admitted he had a relationship with De Lima that lasted seven years.

Dayan was assured of his safety under the protection of the House security led by members of the Philippine Marines to avoid the fate of Albuera, Leyte mayor Rolando Espinosa Sr. who was killed inside his jail in Baybay, Leyte after he executed an affidavit linking numerous persons to his son’s drug trade. His son Kerwin was recently arrested.

In a statement, De Lima appealed to authorities to take care of Dayan.

“We assure Senator De Lima that we will treat him nicely,” Fariñas said.

House justice committee chairman Umali expressed gratitude to the police for serving the warrant on Dayan.

“Maraming salamat at mabulis magampanan ang trabaho natin. We want to serve notice to those who we invite in Congress na huwag balewalahin ang Kongreso dahil we will catch up on you,” Umali said.

Dayan was arrested in La Union 11:30 a.m. Tuesday after he was cited in contempt for snubbing the House of Representatives inquiry in aid of legislation on the proliferation of drugs at the national penitentiary implicating De Lima.

The arrest warrant was duly signed by Alvarez, the closest ally in Congress of President Rodrigo Duterte.

Bilibid inmates who testified in the House inquiry tagged Dayan as the one who allegedly collected millions of kickbacks for De Lima from the drug trade for her senatorial campaign bid.

De Lima has vehemently denied the allegation, pointing out that allies of President Duterte have an ax to grind against her since she has crossed swords with Duterte. De Lima as human rights chair investigated the alleged links of Duterte to the Davao Death Squad when the latter was mayor.

But De Lima has admitted to having an affair with Dayan, but said both of them were separated from their marriages at the time. De Lima has also expressed fears Dayan might be forced to testify against her.