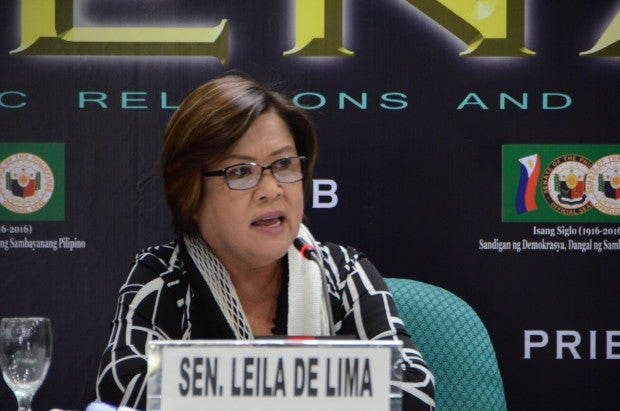 Senator Leila de Lima said her former driver Ronnie Dayan has been in hiding not only because he fears for his life but because he was probably afraid that he would be forced to admit the alleged existence of the so-called sex video.

President Rodrigo Duterte himself had claimed that De Lima had an affair with Dayan, whom he also accused of collecting drug money for her at the New Bilibid Prison (NBP). The senator has repeatedly denied any involvement in illegal drugs.

De Lima said she has “zero” communication with Dayan although she said the latter’s child had texted her once or twice.

But the last time they talked, she said Dayan had told her that he had been receiving information that the police would raid his house, arrest him and force him to testify against her.

And worse, she said, Dayan also feared that he would be killed.

“Kaya hindi ho natin s’ya masisisi kung hanggang ngayon ay ayaw nyang magpakita (That’s why I don’t think we can blame if he does not want to show up),” De Lima said at a regular forum in the Senate on Thursday.

Another reason why she said Dayan has been hiding was for fear that when he surfaced and agreed to testify at the House of Representatives, he would be forced to admit that he was the man in the alleged sex video.

The House justice committee has ordered Dayan’s arrest for repeatedly snubbing its inquiry into the alleged proliferation of illegal drugs when De Lima was the justice secretary.

De Lima expressed doubts however on the House panel’s real agenda why it wanted Dayan to face the probe.

“Do you think they would genuinely look into the so-called proliferation of drugs d’yan sa House inquiry na ‘yan? The real target lang there is to further vilify me personally, to just further downgrade or further destroy ‘yung character or reputation ko,” she said.

(In other words, they will just swarm over him in the House inquiry and force him to admit that we were in a sex video. They just want to further the agenda of the President to destroy me, destroy my reputation and destroy my womanhood. He is probably thinking of that and the threats to his life, that is why he is hiding.)

De Lima also questioned the manhunt operation against Dayan when the House body had already concluded its investigation on the issue.

Besides, she said, cases had already been filed at the Department of Justice and the Office of the Ombudsman in connection with the alleged illegal drug trade at the NBP. IDL/rga