Morales snaps at critics: 'I am not a coward' | Inquirer News
Close
menu
search

Morales snaps at critics: ‘I am not a coward’

Ombudsman Conchita Carpio Morales had this to say on Friday, lashing out at her critics questioning her partiality in the anti-graft office investigation into the involvement of former President Benigno Aquino III over the Mamasapano tragedy.

Morales hit back at her critics in an ambush interview with reporters at the sidelines of a symposium on the best practices on anti-corruption held at Novotel Manila in Cubao.

She told her critics to take on such a “thankless job” as the Ombudsman.

“Maraming bumabatikos sa akin, akala mo kung sino sila. Kayo na maging Ombudsman (Many are criticizing me, as if they think they are someone. Be my guest to be the Ombudsman) It’s a thankless job,” Morales said.

Asked about the dare of the Volunteers Against Crime and Corruption (VACC) to inhibit from the Ombudsman’s investigation into the Mamasapano case, Morales said she does not listen to anybody, and that she only acts based on the evidence.

“I am not listening to anybody. I go by the evidence,” Morales said. 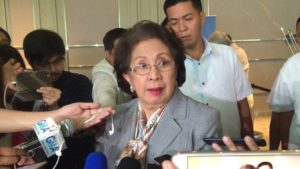 While the Ombudsman dismissed the reckless imprudence complaint resulting in homicide and physical injuries against Aquino, it ordered the filing of graft and usurpation of authority charges against Aquino for conspiring with dismissed police chief Alan Purisima and sacked commander Getulio Napeñas to violate the police chain of command in the botched Jan. 25, 2015 anti-terror operation in Mamasapano, Maguindanao.

The VACC and families of the slain Special Action Force (SAF) troopers alleged Aquino’s negligence botched the anti-terrorism operation culminated in the deaths of 44 SAF cops. The Ombudsman said Aquino’s hand was not the “proximate cause” of the SAF’s deaths.

Morales said the Mamasapano indictment against Aquino is under appeal. Aquino appealed his case saying the Ombudsman “misappreciated” the circumstances of his involvement in the botched operation.

She said she respected the opinion of President Rodrigo Duterte that the Ombudsman’s indictment against Aquino is “silly” and “bound to fail.”

In filing an appeal to the Ombudsman’s dismissal of the reckless imprudence against Aquino, the VACC dared Morales to inhibit and resign from her post.

The feisty graft buster had this to say to the VACC: “Bakit ako mag i-inhibit (Why should I inhibit)? On what ground?”

Pressed for clarification, Morales snapped “I am not a coward!” before walking away.

During the symposium, Morales closed her speech with a call to the public to expose any form of corruption, and not allow the “monstrous effect of corruption to blind us that all hope is gone because there is no truth to that.”

“We’ll be inspired never to take corruption sitting down. You may be one, you may be a few, but that’s perfectly alright,” Morales said.

Morales in her speech addressed her critics, telling them that they may try to “repress” the Ombudsman, but its message can never be suppressed.

“Thank you for the opportunity to speak about the word of the Ombudsman. After all, the Ombudsman can never be silenced. They can attempt to repress the messenger, but they cannot suppress the message,” Morales said in ending her speech.

Asked who these critics she is referring to, Morales said with a glint in her eye: “Kung sinuman tamaan (Who ever gets hit). Bato bato sa langit.” JPV

READ: We are living in trying times, again–Morales