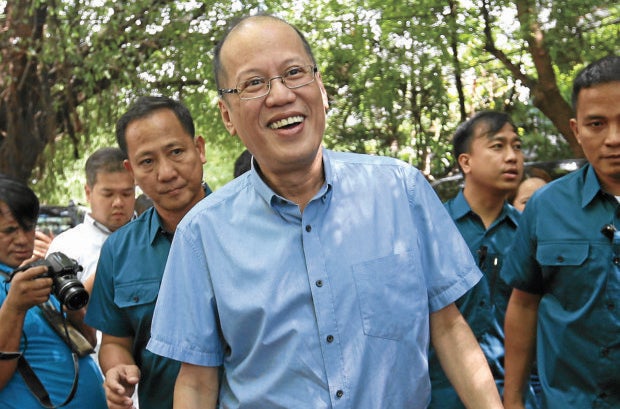 Former President Benigno Aquino III was cleared by the Office of the Ombudsman from homicide charges filed against him for his alleged reckless imprudence in the botched 2015 Mamasapano operation.

In a resolution obtained by the Inquirer, Ombudsman Conchita Carpio Morales said she is dismissing the reckless imprudence resulting in multiple homicide and physical injuries filed against Aquino for his alleged hand in the slay of the 44 Special Action Force (SAF) police officers, who were killed in a firefight during the anti-terror raid.

Also cleared along with Aquino are dismissed police chief Alan Purisima and sacked SAF commander Getulio Napeñas, who had been charged before the Sandiganbayan with graft and usurpation of powers for violating the police chain of command.

The Ombudsman however found probable cause to charge Aquino with graft and usurpation of authority in conspiracy with Purisima and Napeñas, for allowing Purisima to actively participate in the planning and implementation of the Oplan Exodus despite the latter’s graft suspension.

Although Aquino was ordered charged for graft and usurpation of authority for allowing dismissed police chief Purisima to participate in the planning of “Oplan Exodus” despite his preventive suspension for a graft indictment, Aquino cannot be held liable for the deaths of the slain cops.

The Ombudsman said reckless imprudence resulting in multiple homicide and physical injuries can only be proven if there is a “direct causal connection” between the alleged negligence and the sustained injuries and damages.

At the least, reckless imprudence “must be the proximate cause of the collision,” the Ombudsman said.

But Morales said apparently the “proximate cause” of the deaths of the 44 slain SAF troops was the gunfire that erupted at the height of the botched anti-terror raid.

The Mamasapano operation was botched after Napeñas and Purisima failed to coordinate with the military for reinforcement before the launch of the raid, thus delaying the deployment of back-up troops and causing casualties.

This failure to coordinate with the military was the “efficient intervening cause” that only proved Purisima and Napeñas’ negligence in the planning, preparation and actual implementation of Oplan Exodus, the Ombudsman said.

“The proximate legal cause of the 44 deaths among the SAF members, as well as the wounding of its 15 troopers, remains to be the intentional act of shooting by the hostile forces, which are active external factors that may not necessarily be considered as within the full control of respondents, whether with a prior and timely coordination with government forces,” Morales said in her resolution.

The Ombudsman said while it found Purisima and Napeñas guilty of gross neglect of duty, it only pertained to their administrative offense, not criminal negligence.

“In other words, the purported negligence on the part of Purisima and Napeñas was still short of criminal negligence precisely because it was not the proximate legal cause,” Morales said.

Their negligence only contributed to the criminal negligence, the Ombudsman said, citing the time on target concept implemented by Purisima and Napeñas that was marred with the lack of proper coordination with the military for early deployment of reinforcement.

The Ombudsman earlier said that Napeñas’ adherence with the time on target (TOT) concept–or the concept of coordinating with the military only after the elite cops were in the target destination–resulted in heavy casualties because of the delay in coordination.

The TOT also caused Napeñas to bypass the police chain of command and commit usurpation of powers when he coordinated with a suspended police chief instead, Morales said.

Aquino may still file a motion for reconsideration on the Ombudsman’s indictment against him for usurpation of authority and graft.

Read Next
SC told to decide petition requiring Congress to convene on ML issue
EDITORS' PICK
Legarda emphasizes role of ICC/IPs in nation building this IP month
Climate Change Commission and Nestlé PH to discover sustainability-focused solutions
PH study shows 1 in 4 COVID patients at risk for stroke
Work-From-Home is here to stay and requires reliable logistics
SC asked to compel gov’t action vs plastic pollution
Print media group seeks tax breaks
MOST READ
Drivers now required to take driver’s education upon license renewal – LTO
Gordon to Duterte: You? Teaching me courtesy?
Can Marcos Jr. be disqualified?
Marcos Jr’s ‘special diploma’ from Oxford: You can have it, too
Don't miss out on the latest news and information.