A day after officially becoming an ordinary citizen, former president Benigno Aquino III faces a multiple homicide complaint before the Ombudsman over the botched Mamasapano operation, the worst crisis that hit his administration last year.

The Volunteers Against Crime and Corruption (VACC) trooped to the Office of the Ombudsman on Friday and filed a complaint accusing Aquino of reckless imprudence resulting in homicide over his alleged role in the botched “Oplan Exodus” operation that ended the lives of 44 Special Action Force (SAF) cops.

VACC chairman Dante Jimenez accompanied the relatives of some of the elite cops—Erlinda Allaga, mother of PO3 Robert Allaga, and Warlito Mejia, father of PO2 Ephraim Mejia—in filing the complaint to the Ombudsman.

According to the complaint, Aquino should be held liable for the “brutal bestial deaths” of the elite cops “due to negligence, imprudence, lack of foresight and lack of skill in the planning, preparation and execution of Oplan Exodus.”

The complainants cited the Senate inquiry report which found Aquino “ultimately responsible” for the incident which he approved in front of Purisima and Napeñas.

Allaga and Mejia as complainants said “Aquino’s criminal negligence consisted of planning Oplan Exodus with gross and inexcusable negligence and thereafter approved the operation knowing it was flawed.”

They also accused Aquino of criminal liability for allowing suspended Purisima “not only to participate in the Oplan Exodus but in the running thereof during, and even in giving information and intelligence whilst the operation was ongoing.”

“Respondent Aquino knows, or should have known, that running roughshod over the chain of command would wreak havoc on the many aspects of Oplan Exodus and would result in confusion, ambivalence and total operational chaos,” the complainants said.

The complainants said Aquino’s act of allowing the operation to be handled by a suspended chief resulted in the slaughter of the elite cops.

“By giving pseudo-legal power to a suspended official, 44 members of the PNP’s SAF were killed,” they said.

The complainants added that Aquino failed to act as commander in chief in rescuing the elite cops even though he and his Cabinet secretaries were in nearby Zamboanga City on the day of ill-fated operation.

They said Aquino was updated by Purisima by text message about the situation on the ground as if without a sense of urgency to save the elite cops cornered at the height of the firefight.

“Aquino, the commander in chief, did not lift a finger to rescue his soldiers… If he had any foresightedness and judiciousness, he would have employed all means at his disposal… Yet he chose to stay indifferent, and used the unreliability of SMS … Thus he was unable to monitor the progress of the operation, that his men were in danger of being overrun,” the complaint read.

In an interview, the complainants’ counsel Ferdinand Topacio said it’s high time Aquino should be held liable for his alleged offenses now that his immunity from suit has expired.

(There was no criminal intent, but because of negligence, there were people killed. This is no different from a reckless driver who killed a pedestrian.)

(That analogy applies to Aquino. He is the states drive, and because he was negligent in his job, 44 police were killed.)

In a statement, Aquino called Topacio an “attention seeker” and cautioned against the filing of “frivolous” cases against him now that his immunity from suit has expired.

“I am curious as to how Atty. Ferdinand Topacio intends to support his absurd accusations in connection to the tragedy that happened in Mamasapano. I guess this is to be expected from an attention-seeker such as he,” Aquino said.

Aquino said had Napeñas followed his orders to coordinate with the military, the tragedy could have been avoided.

“Let me emphasize: the families of the SAF 44 have experienced so much pain. I am worried that the instigators of this case, in furtherance of their objectives, are setting up the loved ones of the SAF 44 for even more suffering,” Aquino said.

“Finally, I have instructed my lawyers to study possible actions at the appropriate time against those who instigate the filing of frivolous cases, which are nothing more than harassment,” he added.

The complainants want Aquino tried for homicide even though the Ombudsman earlier cleared him from accountability despite his appointment of his friend Purisima to participate in the planning of the operation even while suspended for graft.

Meanwhile, the complainants said Purisima should also be liable for homicide for participating in the operation despite his graft suspension and deliberately refusing to coordinate with Espina and Roxas.

Both Purisima and Napeñas should also be charged for failing to coordinate with the military upon the time the elite cops were on the target which could have resulted in the prompt deployment of forces to rescue the elite cops.

Napeñas also took orders from Purisima knowing full well that the latter was suspended, according to the complaint.

Both the complainants wanted justice for their sons amid the failure of the administration to give benefits to the parents of the victims.

(They have not delivered on their promises. What we are after is justice.)

(Our family really wants justice for my brother and my mother.)

The complainants want the three charged for 44 counts of reckless imprudence as penalized under Article 365 of the Revised Penal Code which at six months for each count of imprisonment may result in a lifetime sentence.

Purisima and Napeñas already face indictment by the Ombudsman for usurpation and graft. Purisima participated in the planning and operation despite his suspension for graft, without informing the then PNP office-in-charge Leonardo Espina and former Interior Secretary Mar Roxas. 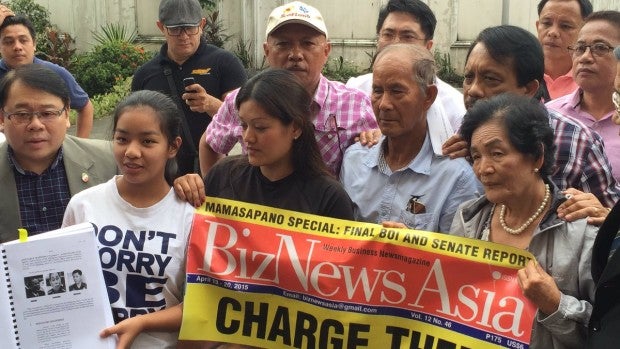 The Ombudsman said Purisima usurped the powers of the officer-in-charge and violated the police chain of command, and committed graft for compelling Napeñas to commit a violation of rules.

Meanwhile, Napeñas faces the charges as Purisima’s cohort in violating the chain of command by not directly coordinating with Espina.

Aquino had put the blame on Napeñas for disobeying his orders to coordinate with the military and police about the pursuit operation against international terrorist Zulkifli bin Hir alias Marwan.

Napeñas said he was misled by Purisima who disobeyed his orders to coordinate with Espina.

READ:  Aquino: Purisima let me down

Napeñas had said he did not coordinate with the military for fears it had been compromised.