Poe, who led   the Senate probe as head of the committee on public order, along with committees on finance, peace, unification, and reconciliation, read during a press conference at the Senate portions of the executive summary of the draft report, which was later furnished to reporters.

Poe admitted though that the draft report did not contain any specific recommendation to file appropriate charges against the President, noting that he is still immune from suit.

The President, she said, may only be held liable through impeachment, which should emanate from the House of Representatives.

In a 7-page executive summary, the committees said, “The President must bear responsibility for giving   assent to and failing to prevent the unlawful exercise of official functions of PDG Purisima in connection with Oplan Exodus.”

Resigned Philippine National Police Chief Director General Alan Purisima, was under preventive suspension by the Office of the Ombudsman when the January 25 Mamasapano operation was launched.

It also pointed out that the President was “fully aware” that Purisima was preventively suspended by the Ombudsman on December 4 and that Deputy Director General Leonardo Espina was designated Officer-in-Charge of the PNP on December 12, 2014 and yet, the President:

The   draft report noted that  the President  himself admitted that all the communication regarding Oplan Exodus emanating from him to sacked Special Action Force  head Director Napeñas, and vice-versa, was being coursed through then suspended Purisima.

“The foregoing shows that the President knew that PDG Purisima was exercising official functions despite the latter’s preventive suspension, and did nothing to prevent it,” it said.

“The President assented to PDG Purisima’s unlawful exercise of official functions, and continued to communicate with PDG Purisima,” it further said. 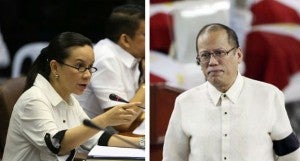 On the part of Purisima, the draft report said the resigned police officer committed usurpation of authority or official functions when he participated in the operation even while he was suspended and he “may be held liable for grave misconduct.”

Napenas, it said, likewise committed   grave misconduct when he directly coordinated and  reported to then suspended  Police Chief.

“Napeñas may also be held administratively liable for inefficiency and incompetence in the performance of official duties and for conduct prejudicial to the best interest of the service on account of the poor planning and execution of Oplan Exodus and his failure to coordinate the operation with the AFP, “the draft report said.

It also found indications that the planning and the execution of the Mamasapano operation “were not 100 percent Filipino planned and implemented.”

The draft report has to get the majority signatures or votes of all members of the three committees before it can be reported to the plenary for   either adoption or rejection.