From 59 percent in November 2014, his approval rating dropped to 38 percent in March 2015 while his trust rating fell from 56 percent last quarter to 36 percent this month.

“This is the first time the President has posted non-majority national approval and trust ratings in Ulat ng Bayan surveys since he was first rated as president by survey respondents back in October 2010,” Pulse Asia said in its media release.

Aquino has been receiving flak for his involvement in the operation, as well as his actions towards the relatives of the slain Philippine National Police-Special Action Force (PNP-SAF) troopers.

His approval rating in Mindanao also fell to 45 percent, from 67 percent, while for the rest of Luzon it slid to 36 percent from 54 percent in November 2014.

A notable increase in his disapproval rating was seen in NCR where it rose by 24 percentage points (from only 17 percent in November 2014 to 41 percent in March). Disapproval ratings also rose for the rest of Luzon, Visayas and Mindanao.

A similar trend was also seen among economic classes. His approval rating fell by 24 percentage points for Class ABC and D (both from 59 percent in November 2014 to 35 percent this month). Among Class E, it fell to 47 percent from 57 percent last quarter. 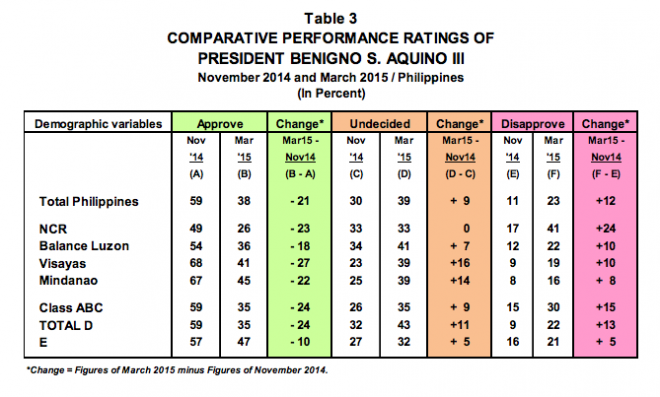 Class ABC also posed the highest increase in distrust, rising to 35 percent this month, from only 14 percent in November last year.

Among the geographical areas, the rise in distrust was highest in NCR (from only 17 percent in November 2014 to 43 percent in March). 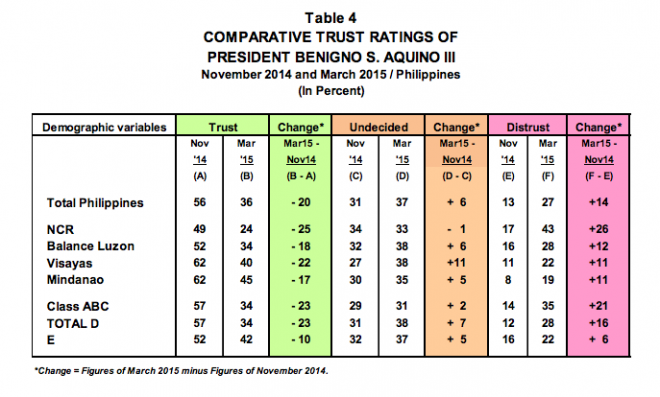