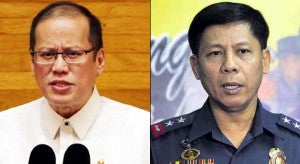 And for having a role in Oplan Exodus, resigned Philippine National Police Director General Alan Purisima, on the other hand, violated his preventive suspension order from the Ombudsman as well as the order of PNP officer in charge Leonardo Espina to stop suspended PNP officers like him from discharging his functions.

In its findings, the Board of Inquiry, which wrapped up its investigation into the January 25 police operations in Mamasapano, Maguindanao that ended in the slaughter of 44 SAF commandos, said that the PNP chain of command was “violated.”

“The President, the suspended CPNP Purisima and the former Director Napeñas kept the information to themselves and deliberately failed to inform the OIC PNP (Leonardo Espina) and the SILG (Mar Roxas). The Chain of Command should be observed in running mission operations,” said the BOI in its executive summary which the Inquirer obtained from a source.

In the case of the President, the BOI concluded that the Chief Executive gave the go-signal to and execution of Oplan Exodus, the operation targeting known terrorists, and allowed Purisima to participate “in the planning and execution of the (mission) despite the suspension order of the Ombudsman.”

And according to the Manual for PNP Fundamental Doctrine, the “chain of command runs upward and downward” and that it requires the “commander to discharge his responsibilities through a chain of command.”

In the three-page executive summary, the BOI said that Purisima violated the Ombudsman’s preventive suspension order when he took part in the mission. Likewise, he also violated Special order no. 9851 issued by Espina last Dec. 16 last year directing him and other suspended PNP officers to “cease and desist from performing the duties and functions of their respective offices during the pendency of the case until its termination.”

Purisima was also cited for assuring Napenas he would coordinate with the military on the mission as ordered by the President.

Purisima was likewise cited for proving the Chief Executive inaccurate information on the actual situation on the ground on Jan.25 “when he sent text messages to the President stating that the SAF commanders were pulling out, and that they were supported by mechanized and artillery support.”

On Napeñas, the BOI said that the SAF commander still followed Purisima’s instructions not to inform Espina and Roxas despite knowing that the latter was suspended, thus violating the PNP chain of command.

“Napenas failed to effectively supervise, control and direct personnel, which resulted in heavy casualties of the SAF commandos,” it said.

Napeñas also followed his time on target coordination concept despite Aquino’s directive for him to coordinate with the military prior to the operation.

“The TOT coordination concept adopted by the SAF does not conform with the established and acceptable operational concepts and protocols of the PNP,” he BOI said.

In its findings, the BOI said that Oplan Exodus “can never be executed effectively because it was defective from the very beginning.”

“Troop movement was mismanaged, troops failed to occupy their positions, there was lack of communication, among the operating troops, command and control was ineffective and foremost, there was no co-ordination with the Armed Forces of the Philippines forces and peace mechanism entities (the Coordinating Committee on the Cessation of Hostilities and the Ad Hoc Joint Action Group),” it said.

The BOI concluded that the mission planning Oplan Exodus was “defective” and this was due to “(1) poor analysis of the area of operation; (2) unrealistic assumptions; (3) poor intelligence estimate (4) absence of abort criteria; (5) lack of flexibility in its Concept of Operation (6) inaccurate application of TOT and (7) absence of prior coordination with the AFP and Ad Hoc Joint Action Group.”

It cited six factors that affected the execution of the operations and these were: