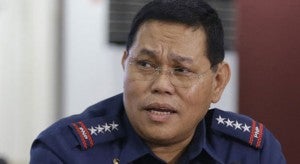 Police Director Gil Meneses, former Chief of the Civil Security Group (CSG) and Chief Superintendent Napoleon Estilles were included in the complaint but were not mentioned in the suspension order because they have already retired.

The preventive suspension will be for six months, according Ombudsman Spokesman Asryman Rafanan at a press conference.

The case stemmed from an anonymous complaint which alleged that Purisima and the other officials siphoned off funds from the mandatory delivery fees paid by gun owners in securing their gun licenses, through the PNP entering into a Memorandum of Agreement (MOA) with WERFAST for courier services in the delivery of firearms license cards.

The MOA dated May 25, 2011 was a result of Oplan Katok aimed at creating a more effective system of monitoring legitimate gun owners.

Documents disclosed that the CSG, through Meneses, approved the accreditation of WERFAST before the company had undergone any accreditation from the Firearms and Explosives Office (FEO) Accreditation Committee.

Despite this, on Feb. 12, 2013, Purisima approved the Memorandum issued by Meneses recommending the implementation of the delivery of approved firearms license cards to the accredited courier service provider. It was only on April 1, 2013 that the FEO thru Petrasanta, Parreno, Acierto, Reyes, Fabia, Calixto, Bautista, Tuazon and Zapata issued a Resolution accrediting WERFAST.

Fact-finding investigation showed that WERFAST was incorporated after the execution of the MOA, with a capitalization of only P65,000.00 and despite having failed to meet the requirements for accreditation such as the submission of a clearance from the PNP Directorate for Intelligence.

Records from the Bureau of Internal Revenue also revealed that WERFAST did not pay any taxes from 2011 to 2013. As per records of the Department of Science and Technology-Postal Regulation Committee, WERFAST is not accredited to engage in courier services in the country. Moreover, there were no records to show that WERFAST established an online facility for applications for renewal of firearms license.