Archbishop Villegas says Catholic Church will work with gov't for reforms but will remain vigilant
Philippine Daily Inquirer / 10:57 AM July 01, 2016 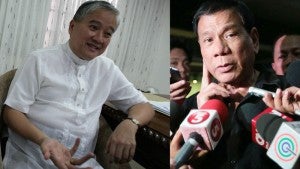 MANILA — As the tough-talking President Duterte began his six-year term on Thursday, the president of the Catholic Bishops’ Conference of the Philippines said the Catholic Church would collaborate for the sake of Filipinos but would be vigilant at the same time.

“Pursuing the same vision as Filipinos and as Catholics, we will be vigilant because vigilance is the great price for freedom… We will offer our critique and denounce error but kindly look at us, not as enemies wanting governments to fall, but as brethren and friends wishing politics to succeed,” CBCP president Archbishop Socrates Villegas said on Thursday.

He described politics as a gift of God as it could help attain peace and progress for society, but it has become a “filthy septic tank of waste and dirt.”

“How does it happen that politics becomes a septic tank rather than a mine of gold? It does not happen in a flash. It happens when values are eroded and virtues are compromised,” he said.

He pointed out that politics would be dirty, if there was no accountability and godliness in government, and no ethics in governance.

He urged politicians to be saints and lead lives worth emulating.

“Can politicians be saints? Yes. Kings have become saints serving their kingdoms. Politics can be a mine of sanctity for leaders and their peoples. Politicians are called to be saintly like all of us,” he said.

Villegas issued the statement on Thursday as Duterte was sworn into office separately from his Vice President, former Camarines Congresswoman Leni Robredo.

The tough-talking Duterte has a strained relationship with the Catholic Church, having attacked it several times as a “hypocritical institution.”

Last year, he also cursed Pope Francis for causing traffic jams during his five-day visit to the country, which earned him the ire of Villegas.

The CBCP president called out the then Davao City mayor for his vulgarity, and called killing and adultery as forms of corruption.  (Duterte has declared a war on illegal drugs, telling policemen not to hesitate in killing drug suspects who would resist arrest.  On the personal front, Duterte’s marriage to Elizabeth Zimmerman was annulled by the court but has not been annulled by the Catholic Church.  He has been living with his partner, Honeylet Avanceña, with whom he has a daughter, Veronica.  The Catholic Church has its own annulment proceedings and does not recognize divorce.)

Duterte also promised to aggressively promote birth control at the risk of going against the Catholic Church, which rejects artificial forms of family planning.

Days before the May 9 elections, the CBCP issued a pastoral letter urging its flock to reject a “morally reprehensible” and “politically precarious” candidate.

The pastoral letter however did not name any particular candidate.

According to the Lingayen-Dagupan archbishop, the country needs leaders who may not be eloquent speakers but who lead lives worthy of emulation.

Meanwhile, a CBCP official said the Filipino people cannot be blind supporters but proactive enablers of reforms in the Duterte administration.

Fr. Jerome Secillano, executive secretary of the CBCP Permanent Committee on Public Affairs said the new President’s speech was not surprising at all as it was a reiteration of his campaign promises.

“He is consistent and clear in his assessment of the country’s problems, and very direct in his approach on how to combat the ills affecting the people,” he said.

However, Secillano said it was inconsistent of Duterte “to say that it is the people from whom democratic governments draw strength, while at the same time marginalizing the same people or institutions by telling them to mind their own business as he minds his own.”

“While we respect him for whatever he wants to do, not minding him will be an affront to our country’s democratic processes. Democracy works through checks and balances,” he stressed.  SFM