Aquino: Purisima let me down 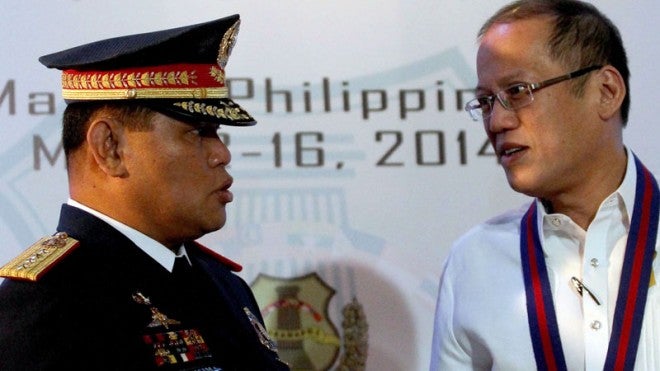 MANILA, Philippines–He had always defended and stood by Philippine National Police Director General Alan Purisima, but this time, President Aquino appeared to have drawn the line following what he felt was a betrayal by his close friend who disobeyed his orders.

“If ever I [was at] fault here, it was [because I trusted] these people. Why did I fail to detect that they were misleading me?” the President said on Saturday night.

He was referring to Purisima, then the suspended PNP chief, and the sacked Special Action Force (SAF) commander, Director Getulio Napeñas, who both briefed him on Jan. 9 about the police operation to get Malaysian terrorist Zulkifli bin Hir, alias “Marwan.”

While the operation successfully took down Marwan, who top security officials said had been recruiting for the Middle East jihadist group Islamic State (IS), it ended in disaster for the SAF, with 44 commandos getting killed in an ambush by Moro rebels.

His handling of the debacle has mired Aquino in the deepest political crisis of his presidency, with critics calling for his resignation and, according to the most recent Pulse Asia survey, 79 percent of Filipinos not believing he had said everything he knew about the Mamasapano debacle.

The scandal that broke following the disclosure that he took part in the planning and execution of the SAF mission forced Purisima to resign as PNP chief.

When Aquino accepted Purisima’s resignation on Feb. 6, he said in a speech that he did so with a heavy heart as he praised his friend.

On Saturday, the President stressed that knowing full well Purisima was suspended, his only directive to him was to coordinate with the PNP officer in charge, Deputy Director General Leonardo Espina.

Aquino said he stressed this to Purisima because on Jan. 8, at a meeting for the visit of Pope Francis, National Security Adviser Cesar Garcia informed him that Espina was “not in the loop” in the hunt for Marwan, his compatriot Amin Baco and their Filipino associate Basit Usman.

The President said he wondered why, but he did not pursue an answer during the meeting.

By sheer coincidence, however, Purisima sent him a text message that day to inform him that Napeñas wanted to brief him about the counterterrorism operation.

Aquino said he told Purisima he was free to meet Napeñas on Jan. 9, after he arrived from an official trip to Romblon province.

Because he already knew that Espina was out of the loop, Aquino said he emphasized to Purisima the need to inform the PNP officer in charge.

“I told Alan that it has come to my attention that Dindo Espina does not know and he is not [in] the loop and you tell him, tell him everything, to which I believe there was an acquiescence. I would not have let him go had he said, ‘Sir, he should not know.’ I would not agree to that. Now [on Jan.] 25, that was when I found out that that was also another order that was not carried out,” Aquino said.

Why was Espina not in the Jan. 9 meeting?

The President said Purisima was the “subject matter expert” in the hunt for the terrorists and even before he was suspended, Purisima had been briefing him on different police operations.

“Alan would have to brief Director Espina, who was the understudy and had to catch up, and then he (Espina) would brief me. [But] then I [could] have the guy who was on top of all this before,” Aquino said.

He stressed that Purisima was at the meeting “not to command or plan anything but just to help me understand what Napeñas and his people were talking about.”

The President also said that he stressed the importance of coordinating the police operation with the Armed Forces of the Philippines days before the departure of the SAF commandos for Mamasapano.

“If there were concerns [about] operational security, then I told him (Napeñas) to talk to one person in the AFP who could coordinate once the operation is about to begin,” Aquino said.

After the debacle in Mamasapano, Aquino said he texted Purisima to ask him why his orders to brief Espina were not carried out.

And what did Purisima say?

“He did not respond. I guess there is no answer,” the President said.

Aquino did not answer directly when the Inquirer asked him if he and Purisima remained friends.

Instead, he said: “At one point, I will have to ask them (Purisima and Napenñas), ‘What were you thinking? Why did this happen?’ We’ll just finish all this and I will ask him (Purisima) and Napeñas as well, ‘What’s wrong with my orders to you?’”

De Lima: Aquino not scot-free of any liability for Mamasapano debacle