MANILA, Philippines–If anything, the rumor that he collapsed on Friday night made President Aquino appreciate his “short hair.”

“For the first time, I was happy that my hair is short because it will show if I have stitches. I tried to feel my head, there’s no bump,” Aquino said Saturday night, turning his head for reporters to see.

Word spread early on Saturday that the 55-year-old President collapsed around midnight on Friday. Malacañang denied the rumor and asked the public and the press to be prudent in transmitting information.

On Saturday afternoon, Aquino went on his regular trip to the Presidential Security Group firing range with a retinue of shooting buddies that included Internal Revenue Commissioner Kim Henares, Agriculture Secretary Proceso Alcala and his bodyguards.

From there, the group of around 25 proceeded to Gloria Maris restaurant at Gateway Mall in Araneta Center in Cubao, Quezon City, to celebrate the birthdays of three of his friends.

Wearing a gray sports shirt, denims and sneakers, Aquino appeared to have lost weight but was in high spirits.

The President said he was “very surprised” to receive a text message from his spokesperson Edwin Lacierda on Friday night asking him if he indeed collapsed.

He denied he passed out.

An incapacitated President renders the state leaderless, and, as such, would need the Vice President to step in to fill the leadership vacuum, no matter if it’s only for hours.

“I’m torn between responding to the people who started it,” Aquino said, but did not finish the sentence. Instead he said, “But as you can see there’s nothing different.”

“And to be honest with you,” he went on, “I even tried to think of any basis whatsoever. Unfortunately, nothing. So, as my mother said, let’s just pray for those people who think like that.”

Aquino said he first broke the news that he collapsed to his longtime housekeeper Yolly. 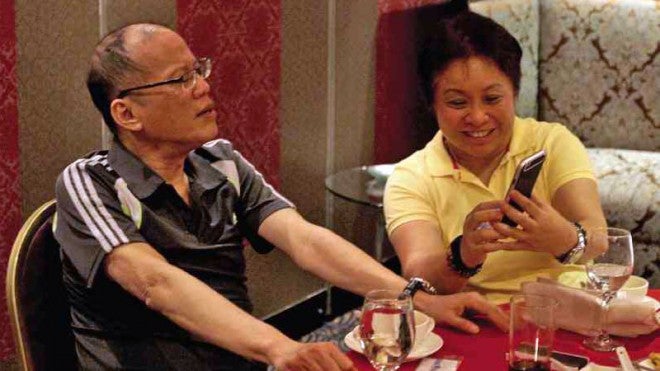 PRIVATE DINNER Revenue Commissioner Kim Henares shares a smartphone message with President Aquino during a dinner with friends in a restaurant in Quezon City. RICHARD A. REYES

Yolly, he said, was just as surprised and asked where the talk had come from.

Aquino said he would not be surprised if the rumors that he was sick or unhealthy would persist.

“Of course, we know, we are not new to politics. Whatever we say, they are ready with permutations of their spin,” he said.

“In the end, we cannot really stop all those who wish us evil,” he said. “But those who trust us, their eyes, ears and minds are open.”

The President said he was in Kawit, Cavite province, on Friday morning for the inauguration of the new Emilio Aguinaldo museum and remembered that the flag-raising ceremony that he led was “brisk.”

“And I don’t think I faltered in raising the flag and in doing all the other things [related to] the opening of the Aguinaldo museum,” he said.

The rumor that the President passed out appeared to have begun with a tweet by a television reporter who quoted an anonymous source, but included in the tweet Lacierda’s denial.

The tweet, however, was quickly picked up by other news organizations, giving rise to variations that spread fast.

One “unconfirmed” report was that the President passed out after a fit of “heavy coughing” and was “nearly unconscious.”

He was reportedly sedated and given oxygen by doctors at his official residence on the Palace grounds.

‘Aquino in pink of health’

Amid rumored collapse, Aquino calls for, then cancels meeting with press