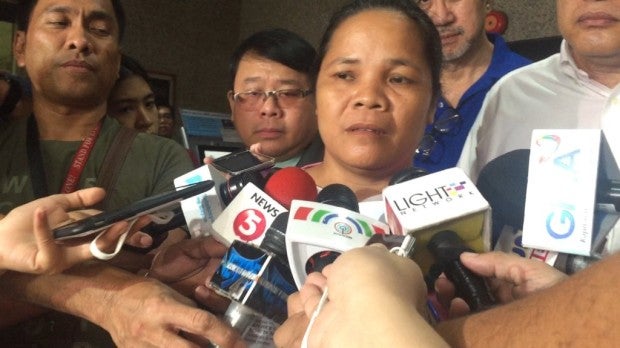 A third batch of relatives of the slain Special Action Force (SAF) cops on Friday filed a complaint of reckless imprudence resulting in multiple homicide against former president Benigno Aquino III over the botched Mamasapano operation that cost the lives of 44 elite cops last year.

This is the third in a series of complaints against Aquino, dismissed police chief Alan Purisima, and sacked SAF commander Getulio Napeñas over the botched “Oplan Exodus” operation in Mamasapano town, Maguindanao on Jan. 25 last year.

Accompanied by the Volunteers Against Crime and Corruption (VACC), the relatives who filed the complaint are Telly Sumbilla, mother of PO3 John Lloyd Sumbilla; Helen Ramacula, mother of PO2 Rodel Ramacula; and Lorna Sagonoy, mother of PO1 Joseph Sagonoy.

Joseph Sagonoy was the subject of a viral video depicting a SAF cop being shot in the face during the encounter.

The kin’s counsel, Ferdinand Topacio, said the relatives were all from Samar.

In an interview, Mrs. Sagonoy said it pains her to file the case remembering how brutally killed her son was in the video.

All she wants, she said, was to seek justice and get back at the former president.

“Hustisiya lang po, hindi pera. Para makaganti lang kami… Masakit talaga sa amin ang makita ang video niya, kasi napakahirap ng pinagdaanan niyang pagkamatay (We want justice, not money. We want to get our retribution… It has really been painful for us to watch our video because he suffered an agonizing death),” calmly said Sagonoy who stood beside two other mothers who broke down as they recounted the deaths of their sons.

“Minsan, nagigising kami ‘pag nakikita ko po ‘yung katawan niya (There were nights when I would wake up after dreaming about his dismembered body),” said Sumbillo, who said her son’s arms were dismembered and eyes gouged out when the body was found.

Sumbillo cried as she held Aquino accountable: “Kahit tagabundok kami, alam ko kung ano ang dahilan kung bakit sila pinatay (Even though we come from the mountains, we know why they were killed).”

“Sumunod lang sila sa utos ni PNoy, tapos pinabayaan lang. Ni isang chopper, walang pinalipad (They were just following Aquino’s orders, but they were neglected. The government did not even send out a single chopper),” she added.

Ramacula was barely able to give her statement as she sobbed over her son’s fate.

“Hindi po ako nagpalaki ng anak para patayin (I did not raise my son only for him to get killed)!” she cried out, her head on Sagonoy’s shoulders.

In their complaint, the relatives reiterated that Aquino should be held liable for his alleged criminal negligence in approving the flawed operation, and then authorizing Purisima who was then suspended and later dismissed from the Philippine National Police (PNP) for graft over an anomalous gun license courier deal.

Purisima and Napeñas should also be held liable for their failure to coordinate with the military for help at the time the SAF cops were being butchered, the elite forces’ kin said.

“It was therefore criminally imprudent and evinces lack of foresight on the part of Aquino to require and leave the intelligence, planning inputs, and the control and command of Oplan Exodus to respondent Purisima, when at that time, he was suspended as Chief of the PNP, and therefore had no legal authority over elements of the entire PNP,” the SAF kin said in their complaint.

Atty. Topacio was moved to tears as he tried to share the grief of the SAF kin.

Topacio said the relatives were the ones seeking legal help from him and the VACC.

He also said the SAF kin were offered counseling to help them cope as they revive the pain in filing a complaint against Aquino.

The complainants said Aquino’s reckless imprudence resulted in the slaughter of the elite cops, who succeeded in neutralizing Marwan but were not rescued when the Muslim fighters closed in and shot them. IDL/rga