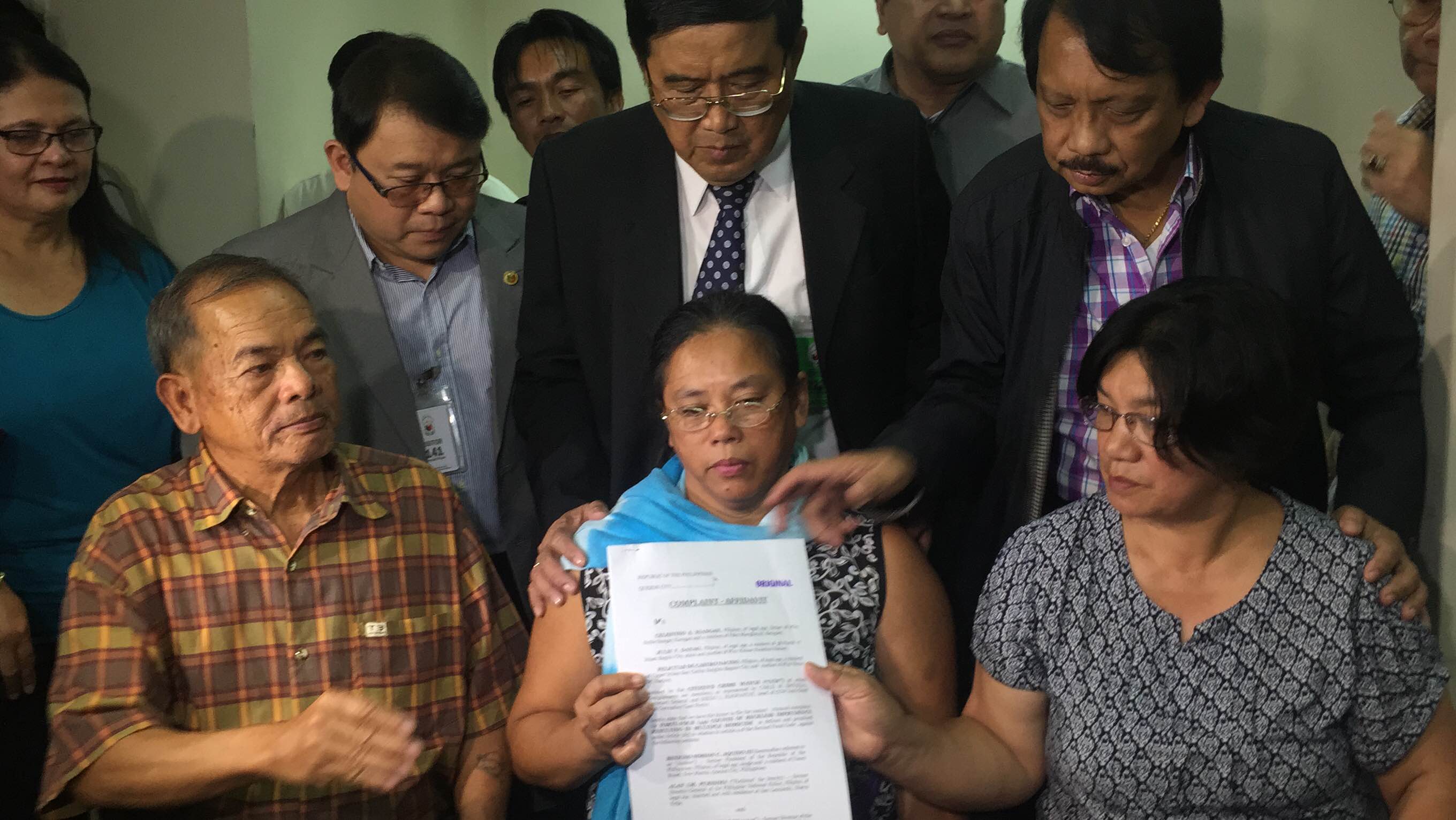 More relatives of the elite cops who were killed in the Mamasapano operation last year file a complaint of reckless imprudence resulting in multiple homicide against former president Aquino over the botched “Oplan Exodus.” Photo by Marc Jayson Cayabyab

More relatives of the slain Special Action Force (SAF) members on Friday filed a complaint for reckless imprudence resulting in multiple homicide against former President Benigno Aquino III over the botched Mamasapano operation that resulted in the deaths of 44 elite cops last year.

The  Volunteers Against Crime and Corruption (VACC) accompanied the relatives of the slain SAF cops at the Office of the Ombudsman  in filing a second complaint of reckless imprudence resulting in multiple homicide against Aquino, dismissed police chief Alan Purisima, and sacked SAF commander Getulio Napeñas.

PO2 Danao was the SAF cop who figured in a viral video showing him being kicked in the head and stripped naked after the encounter, his mother said.

“Kay President Duterte, we need justice [because] I know you’ll understand and you’ll help us. We’re here to claim your word. Ang sabi mo kung sinong may sala siya ang sasagot. Nandito na kami ngayon humihingi ng justice (You said that whoever was at fault would be held accountable. We are now here asking for justice)!” the teary-eyed mother of PO2 Danao said.

Mrs. Nacino denied criticisms that parents of the SAF victims wanted Aquino charged because the soldiers’ wives and not the parents received the benefits promised by government.

“We come here to ask for justice for the SAF 44 who died violently,” added Mr. Kiangan.

In their complaint, the relatives reiterated the allegations in the first complaint that Aquino should be held liable for the botched operation because he authorized Purisima even though the latter was suspended for graft at the time, and for his failure to order the  rescue of  the elite cops when they were being slaughtered by Muslim flighters at a cornfield in Mamasapano, Maguindanao on January 25 last year.

The elite cops succeeded in neutralizing terrorist Marwan but were not rescued when the Muslim fighters closed in and shot them.

“Verily, it would serve well our country and its people for a formal criminal inquiry to be made in court against the respondents, to make the hammer fall where it may, so to speak, and mete justice for the deaths of the 44 patriots,” their 35-page complaint affidavit read.

Earlier, the VACC accompanied the relatives of some of the elite cops—Erlinda Allaga, mother of PO3 Robert Allaga, and Warlito Mejia, father of PO2 Ephraim Mejia—in filing the complaint with the Ombudsman.

In the first complaint, petitioners alleged that Mr. Aquino should be held liable for the “brutal bestial deaths” of the police commandos  “due to negligence, imprudence, lack of foresight and lack of skill in the planning, preparation and execution of Oplan Exodus.”

Allaga and Mejia as complainants said “Aquino’s criminal negligence consisted of planning Oplan Exodus with gross and inexcusable negligence and thereafter approved the operation knowing it was flawed.”

They also accused Mr. Aquino of criminal liability for allowing suspended Purisima “not only to participate in the Oplan Exodus but in the running thereof, and even in giving information and intelligence whilst the operation was ongoing.”

“Respondent Aquino knows, or should have known, that running roughshod over the chain of command would wreak havoc on the many aspects of Oplan Exodus and would result in confusion, ambivalence and total operational chaos,” the complainants said.
READ: House minority report on Mamasapano finds Aquino liable for SAF men massacre

The complainants said Mr. Aquino’s act of allowing the operation to be handled by a suspended chief resulted in the slaughter of the elite cops.

“By giving pseudo-legal power to a suspended official, 44 members of the PNP’s SAF were killed,” they said.

The complainants added that Mr. Aquino failed to act as commander in chief in rescuing the elite cops even though he and his Cabinet secretaries were in nearby Zamboanga City on the day of the ill-fated operation.

They said Mr. Aquino was updated by Purisima by text message about the situation on the ground as if without a sense of urgency to save the elite cops cornered at the height of the firefight.

“Aquino, the commander in chief, did not lift a finger to rescue his soldiers… If he had any foresightedness and judiciousness, he would have employed all means at his disposal… Yet he chose to stay indifferent, and used the unreliability of SMS … Thus he was unable to monitor the progress of the operation, that his men were in danger of being overrun,” the complaint read.