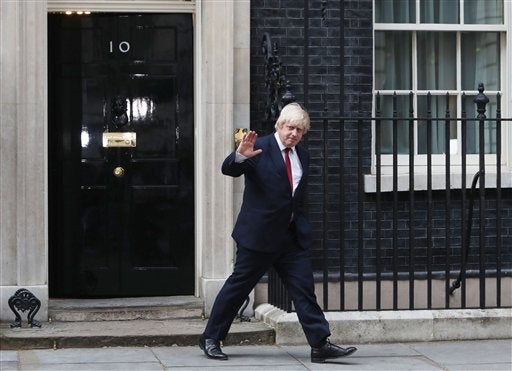 LONDON—British Foreign Secretary Boris Johnson said Thursday that quitting the EU did not mean “leaving Europe”, as he brushed off criticism of his appointment in Prime Minister Theresa May’s new Brexit government.

“We have to give effect to the will of the people in the referendum, but that does not mean, in any sense, leaving Europe,” said Johnson, who led the victorious campaign to quit the bloc.

May took over Wednesday after David Cameron stepped down as premier in the wake of the June 23 vote, which sent shockwaves around the world and sparked fears of an economic downturn as Britain potentially faces exclusion from its biggest market.

After six years as Cameron’s interior minister, May was viewed as a safe pair of hands to replace him, but began with a cull of some of her former cabinet colleagues.

The former London mayor is popular in Britain and well-known abroad, not least for a colorful use of language regularly directed at foreign leaders.

US President Barack Obama called May to congratulate her on Thursday, but White House spokesman Josh Earnest offered a tepid response to her choice of foreign secretary.

The “special relationship” between the two countries “transcends any single personality”, he said.

Speaking to reporters outside the Foreign Office, Johnson had earlier shrugged off the idea that his appointment was controversial.

“After a vote like the referendum result on June 23, it’s inevitable that there is going to be a certain amount of plaster coming off the ceilings in the chancelleries of Europe,” he said.

READ: Brexit: How Europe fell out of love with the EU

He also dismissed comments by French Foreign Minister Jean-Marc Ayrault that he had “lied a lot” during the Brexit campaign, saying he had received a “charming letter” from his new French counterpart.

He later attended a Bastille Day party at the French ambassador’s residence in London, to “reassure everybody about Brexit”.

“We will intensify the cooperation and partnership at an inter-governmental level, and forge a new global role,” he said.

But his speech was received with both cheers and boos.

May’s first visit outside London will be to Scotland on Friday for talks with Scottish First Minister Nicola Sturgeon to discuss the path to Brexit.

Sturgeon is threatening to hold another referendum on Scottish independence due to the EU vote.

“My job is to seek to protect Scotland’s interests,” Sturgeon told STV television.

In her first speech as prime minister, May stressed the importance on keeping the UK united.

Controversy over Johnson’s appointment overshadowed the first day of May’s premiership, which brings some stability after three tumultuous weeks following the EU vote.

European leaders have pressed her to move quickly in implementing Brexit, amid fears of the damage the continued uncertainty could do to the EU and the world economy.

New finance minister Philip Hammond warned Brexit was having “chilling effects” on the financial markets and said business investment decisions were being put on hold.

The Bank of England on Thursday held off on an anticipated cut in interest rates, keeping them unchanged at 0.50 percent, but signalled a possible cut next month.

The British pound briefly jumped above $1.34, while London’s FTSE 100 index slid after the bank announcement. Frankfurt’s DAX 30 rallied to its highest point since the Brexit vote.

Johnson had appeared destined for the political wilderness after backing out of the contest to replace Cameron as Conservative party leader.

British and European media reacted with incredulity to his appointment, noting he had once described Clinton as a “sadistic nurse in a mental hospital”, and compared the EU’s ambitions for closer integration to Adolf Hitler’s.

Others noted that he will not be in charge of EU exit negotiations — and may still yet prove himself.

“He’s got some apologies to make, but as the UK’s salesman, he’ll do a stand-up job,” said Simon Usherwood, senior politics lecturer at the University of Surrey.

Johnson had a call with US Secretary of State John Kerry, where they pledged to work together as NATO allies and Kerry offered US support for “a sensible and measured approach to the Brexit process”, a US spokesman said.

May had personally campaigned to stay in the EU but confirmed that “Brexit means Brexit” by appointing two arch eurosceptics to her cabinet.

David Davis has been put in charge of exit negotiations as new Brexit minister, while Liam Fox has responsibility for negotiating new trade agreements outside the bloc.