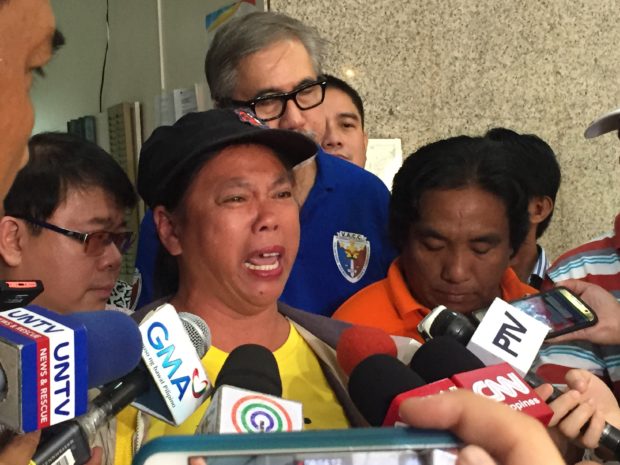 The Volunteers Against Crime and Corruption (VACC) accompanied Telly Sumbilla, mother of slain PO3 John Lloyd Sumbilla, and Felecitas Nacino, mother of slain PO2 Nicky Nacino, who both broke down as they lamented Ombudsman Conchita Carpio Morales’ selectiveness in indicting Aquino over the botched anti-terror operation.

This after the Office of the Ombudsman dismissed the reckless imprudence resulting in multiple homicide and physical injuries against Aquino. The anti-graft office however, ordered Aquino charged before the Sandiganbayan with graft and usurpation of authority.

Nacino decried Morales’ alleged selective justice in letting Aquino off the hook for the lives of the slain SAF policemen. A retired Supreme Court justice, Morales was appointed as Ombudsman by Aquino in 2011.

Sumbillo lamented the lack of justice for the common people while Aquino is spared from liability over the botched anti-terror raid.

She called the Ombudsman’s indictment against Aquino for graft and usurpation a false consolation, decrying the injustice in Morales’ dismissal of the reckless imprudence complaint.

(What Justice Morales did is a false consolation. It’s injustice, we don’t have a reliable justice system. Why? Because they are influential and we are only poor)?” she said.

The SAF kin’s counsel Ferdinand Topacio and VACC Chairperson Dante Jimenez both hit Morales for filing supposed flimsy criminal charges against Aquino. They urged her to resign from her post.

READ: Aquino: My conscience is clear

“We want her not just to inhibit. We want her to resign. This is just shameful, just shameful… Ombudsman Morales has become a biased ombudsman and selective na po ang justice dito (and justice has been selective here)” Topacio said, citing the Ombudsman’s filing of pork barrel scam charges against the opposition while sparing administration allies, at the same time letting Aquino off the hook in the Disbursement Acceleration Program case.

Jimenez said Aquino’s indictment for graft and usurpation of authority is not enough to make up to the deaths of the 44 slain SAF policemen being blamed on Aquino’s hands.

“Halatang halata po si Morales (Morales is very much obvious). Kaya she has to resign and inhibit herself from this. Ombudsman, protect your institution, not Morales,” Jimenez added.

In their motion for reconsideration filed on Wednesday, the complainants refuted the Ombudsman’s claim that Aquino’s alleged negligence did not result in the deaths of the slain 44 elite troopers.

In its resolution, the Ombudsman said reckless imprudence resulting in multiple homicide and physical injuries can only be proven if there is a “direct causal connection” between the alleged negligence and the sustained injuries and damages.

In this case, the “proximate cause” of the deaths of the 44 slain SAF troops was not Aquino’s alleged negligence, but the gunfire that erupted at the height of the botched anti-terror raid, the Ombudsman said.

The complainants maintained that Aquino’s negligence resulted in the deaths of the SAF 44, precisely because Aquino’s alleged reckless imprudence and negligence was the “first act that set off the chain of events leading to the deaths of SAF 44.”

The complainants cited the following acts by Aquino that set off the series of unfortunate of events in Mamasapano — approving the “flawed” Oplan Exodus; allowing dismissed police chief Alan Purisima to lead the operation despite his suspension for graft; and failing to send reinforcement and aid as the elite cops were being slaughtered in the crossfire.

Complainants found it “bizarre” that the Ombudsman found that the cause of the SAF 44’s deaths was not Aquino’s negligence, but the “intentional act of shooting by hostile forces.”

“This is like saying that in a motor vehicle accident, the proximate cause of the death of a pedestrian is the hitting of his body by the vehicle,” the complainants said.

They reminded Ombudsman that their complaint was merely for reckless imprudence resulting in homicide and injury, not murder or homicide as the office seems to suggest.

The complainants likened Aquino’s alleged role in the botched raid to that of a bus driver, who should be liable for the deaths of the passengers in the event the bus falls of a ravine.

“In this case, the question that begs to be answered is: Who put the SAF 44 in the line of fire that made them easy targets for the guns of the hostile forces?… The SAF 44 were there due to the defective orders of a defective president… He is thus the proximate cause,” the complaint read.

The complainants said Aquino should be criminally liable for allowing Purisima to participate despite the latter’s graft preventive suspension, which violated the police chain of command, “wreak(ed)  havoc” on the operation, and caused “total operational chaos.”

The appeal ended in an epilogue with a cartoon, showing a rifle planted on the ground, smoke wafting in the air composing the words “waiting for justice.” with a report from Celine Amilhamja, INQUIRER.net trainee / JPV

Read Next
Saudi woman in miniskirt video arrested after public outcry
EDITORS' PICK
Legarda emphasizes role of ICC/IPs in nation building this IP month
Gordon calls 2 Pharmally execs ‘Senate fugitives’ after no-show in probe
What’s at stake for every fighter at ONE: NextGen
Isko Moreno bares ‘two-pronged’ approach to rehabilitate MSMEs
NCR’s COVID-9 alert level may be downgraded from 3 to 2 soon — DOH
Climate Change Commission and Nestlé PH to discover sustainability-focused solutions
MOST READ
Drivers with no traffic violations can now renew licenses for 10 years
LJ Reyes says Paolo Contis made ‘no efforts’ to talk to her after their split
Yang’s Princeton degree raises eyebrows among senators
Gordon to Duterte: You? Teaching me courtesy?
Don't miss out on the latest news and information.