We are living in trying times, again–Morales | Inquirer News

We are living in trying times, again–Morales

This generation ‘has entered the so-called ‘post-truth’ era where truth does not really matter anymore’
By: Vince F. Nonato - Reporter / @VinceNonatoINQ
Philippine Daily Inquirer / 12:19 AM November 27, 2016 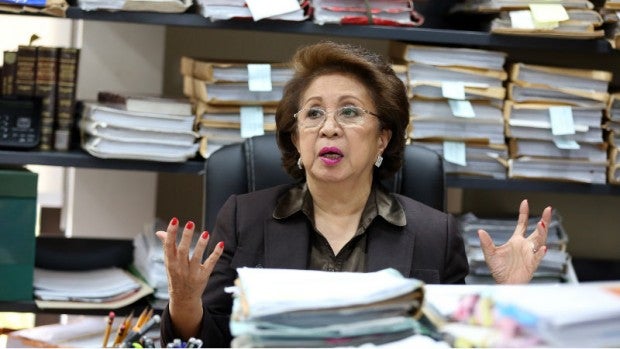 “Just because you can does not mean you should,” Ombudsman Conchita Carpio Morales on Friday chided the country’s leaders in a hard-hitting speech that touched on several polarizing issues under the Duterte administration, among them the hero’s burial given ousted authoritarian President Ferdinand Marcos.

People should be bothered “when the leaders themselves could not figure out what is right and wrong,” Morales told fellow alumni of the University of the Philippines College of Law in their annual homecoming.

The Ombudsman’s  speech alluded several times to controversial decisions made by President Duterte, to whom she is related by affinity through his daughter, Davao City Mayor Sara Duterte-Carpio. Morales is the sister of Lucas Carpio, whose son, Mans, is married to Sara.

“We cannot pretend to end impunity by clothing ourselves with impunity as well,” she said, adding: “He who enforces accountability must himself be ready to assume accountability.”

Morales also warned of how “great people fall as prey and transform as predators themselves.”

Also at the event was chief presidential legal counsel Salvador Panelo who said it was Morales herself who asked him to come.

This generation, the Ombudsman said in her speech,  “has entered the so-called ‘post-truth’ era where truth does not really matter anymore.” Post-truth politics, she said, is characterized in huge part by a public that would rather believe fake news sites and “echo the baseless assertions of dubious bloggers and flamebaiters.”

“Post-truth,” the Oxford Dictionaries Word of the Year, is an adjective that “denotes circumstances in which objective facts are less influential in shaping public opinion than appeals to emotion and personal belief.”

In a thinly veiled speech that stopped short of naming any incumbent leader, Morales stressed two all-important tenets of the Ten Commandments: Thou shalt not steal and thou shalt not kill.

“When leaders seem to send the message of promoting, rather than condemning, reprehensible acts that transgress basic human rights, the people ought to be concerned about it—rather than cheering for it either out of sheer ignorance, callous conscience, blind loyalty, or gorgonized fanaticism,” she said.

Recalling how the Marcos regime had been polarizing even to UP Law students of four decades ago, the Ombudsman declared: “Indeed, these are interesting times we live in—again.”

Morales also slammed the “alarming attitude”  behind the “revisionist-distortionist proclivity” of today’s politics. It was, she said, an “affront to our collective consciousness as a nation,” especially since Filipinos have fallen victim to a “kleptocratic” regime that stashed ill-gotten wealth, as established by the courts.

Paraphrasing Lord Acton’s oft-quoted take, she said: “As it turns out nowadays, those who could not remember history have the tendency to rewrite it. Much worse, there are a lot of people who simply do not want to read their history.”

When the supposed “truths” about purported “progress” under martial law become more fact than fiction, “we see a transformation of our values as a people,” Morales said. “Now it is not only truth that has become elusive—even reason has escaped us,” she added.

People “at this time and clime” need to confront one nagging question: “What have we become as a nation?” the Ombudsman said, even as she implored her colleagues in the legal profession to be ethical.  The legitimacy of law is kept afloat by the underlying ethical values of a society,” she added.

“We should not wait until the ‘sea of ethics’ runs dry, nor should we allow the navy captain to altogether dismantle the  ‘lighthouse’ that gets in his way,” Morales said.

After the Ombudsman’s scathing speech, Panelo said she told him: “Thou shalt not kill ah. Naintindihan mo (do you understand)?” To which he replied, “Oo (yes).”

“In effect, she was attacking (the administration). But that’s just the way things are. People have different perspectives,” he told reporters.

Panelo said Morales, whom he calls “a friend” and “a woman of conviction and integrity,” may have “failed to appreciate the gravity of the drug problem.”

“We have four million potential killers, rapists, thieves because they are afflicted with drugs. We have, how many surrenderers? Almost a hundred thousand,” he said.

“These surrenderers are the reason there have been extrajudicial killings,” Panelo said, adding that the incidents were the handiwork of drug syndicates to prevent drug users and couriers from telling on them.

Panelo also took exception to Morales’ criticism of the hero’s burial given Marcos, saying that it does not bestow on him the status of a hero.