Communications Assistant Secretary Ana Marie Banaag  said “there are three main groups of left-oriented indigenous people schools, this is according to the Department of Education.”

She said the Alcadev of   Surigao “has no permit to operate and refuses to get a permit from the Department of Education.”

“The Clans, on the other hand, has been given 3 months to comply with DepEd requirements,” she said.

Banaag said aside from left-leaning lumad schools, the DepEd has established Lumad schools complying with the agency’s curriculum and other requirements. 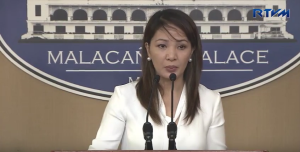 “There are Lumad schools established by religious groups and civic organizations, which are legitimate.   Also, there are three indigenous people schools that have been constructed by the Department of Social Welfare and Development,” she said.

During the press conference after his second State of the Nation Address (Sona) on Monday, President Rodrigo Duterte said he would bomb Lumad schools teaching subversive ideas to its students.

But Duterte clarified his statement on Thursday, saying he had no plans to kill Lumad children but only wanted to “destroy” schools without government permits.

“It is the illegal Lumad schools which drew the President’s adverse reaction,” she said.

Padilla said Duterte  was only sending a “very strong message” against illegal educational centers teaching children to rebel against the government.

Read Next
Signal No. 2 up in Batanes as ‘Gorio’ intensifies into typhoon
EDITORS' PICK
TNT nears PBA crown after rout of Magnolia in Game 4
Climate Change Commission and Nestlé PH to discover sustainability-focused solutions
Renewal of driver’s license now requires taking LTO education seminar
Legarda emphasizes role of ICC/IPs in nation building this IP month
Cusi: PDP-Laban convincing Duterte to run for senator in 2022 polls
Work-From-Home is here to stay and requires reliable logistics
MOST READ
Drivers now required to take driver’s education upon license renewal – LTO
Marcos Jr’s ‘special diploma’ from Oxford: You can have it, too
Bongbong Marcos camp eyeing Pacquiao, VisMin bets as VP options — Imee
Don’t do that: Robredo to supporters calling to boycott restos supportive of Marcos
Don't miss out on the latest news and information.