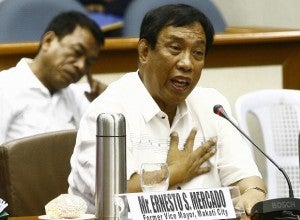 Testifying before the committee, Mercado claimed that Binay used a certain Gerardo Limlingan and Erlinda   Chong as fronts in the Makati lot, which was split   between the local government and the military to house its personnel.

Mercado had already mentioned a certain Gerry Limlingan in his previous testimony in the committee and identified him as finance officer of the Vice President, who he said had received kickbacks for Binay.

But he said the property that went to the city government became a private property later under a company owned   by Chong, who he said is a contributor of canned goods.

The lot, which he said now costs more than P1 billion,   was eventually divided into four – one was sold to the Mormons while the three remained with Chong.

He also noted that when Chong was selling a portion of the land , it was Limlingan who was talking to the Mormons.

Mercado claimed that the Vice President was also part owner of Omni Security.

Notably, he said, Limlingan was also the co-signatory of the former president of Omni in all its transactions with the Makati City government.

A former president of Omni, Jose Orillaza, who was   present in the hearing, confirmed that Limlingan was indeed his cosignatory in the cheques of Omni though the latter was not an incorporator of Omni.

Asked by Trillanes if he would admit that he was used as a dummy of the Vice President, Limlingan answered yes.