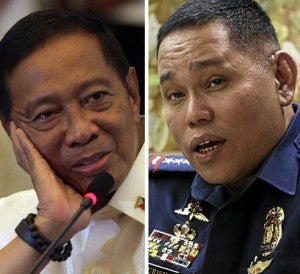 Vice President Jejomar Binay on Monday said he and his family were open to a lifestyle check “anytime,” as he declared that his political foes had intensified their vilification campaign by rehashing graft and corruption cases against him that did not prosper.

Binay made the statement on the day a group asked the Office of the Ombudsman to charge Philippine National Police Director General Alan Purisima with plunder, graft and indirect bribery for the renovation of his official residence in Camp Crame and for allegedly undervaluing a property in Nueva Ecija province.

The group filed the case against Purisima while Malacañang, the Office of the Ombudsman and the Bureau of Internal Revenue (BIR) are drafting rules for the conduct of mandatory lifestyle checks on the 148,000-strong police force.

Measures to examine the lifestyles of PNP personnel are being drawn up after policemen were linked to crimes, including Metro Manila policemen who were implicated recently in kidnap-for-ransom cases.

Interior Secretary Mar Roxas said he himself would submit to a lifestyle check once guidelines are issued in the next two weeks.

“I won’t give the order for my subordinates to submit to this process if I am not ready to join them,” Roxas, whose department is in charge of the PNP, told reporters in Baguio City on Monday.

Asked about a proposal by the United Makati against Corruption (Umac) for him and his family to be subjected to a lifestyle check, Binay said “anytime.”

Umac is demanding the lifestyle check so that the Binays could prove they had nothing to hide amid corruption allegations against the Vice President, including receiving kickbacks from the allegedly overpriced Makati City Hall Building II that was built when he was still Makati mayor.

The Vice President spoke to reporters after he attended the 2014 Bagong Bayani Awards at the Philippine International Convention Center in Pasay City.

It was the first time Binay gave an interview following a televised address to the nation last week in which he denied benefiting from the construction of the parking building or any infrastructure project in Makati.

Binay then made reference to a story by ABS-CBN about the alleged property owned by Purisima in Nueva Ecija after a reporter from the television network asked him if he was amenable to a lifestyle check.

Binay replied “yes” and said it turned out to be a “big story,” apparently referring to the TV network that used a helicopter to go to the property in Nueva Ecija.

In a complaint filed Monday, the Coalition of Filipino Consumers (CFC) accused Purisima of plunder and indirect bribery for accepting donations from his Mason brothers to renovate the so-called White House in the PNP Camp Crame headquarters in Quezon City.

CFC secretary general Perfecto Jaime Tagalog said Purisima was barred from accepting any gifts or donations as a public official.

The group also accused Purisima of graft because he declared his property in San Leonardo town, Nueva Ecija, for P3.75 million, believed to be below the property’s actual value.

Tagalog said the Ombudsman should investigate further since Purisima was refusing to release to the group his statement of assets, liabilities and net worth (SALN).

“Declaring the mansion [in] San Leonardo, Nueva Ecija, in the amount of P3.7 million is clearly an act of undervaluation or misdeclaration of value of the property, which is in violation of the guidelines in the filing of SALN,” he said.

The Vice President said his accusers had failed to provide any concrete evidence against him in the ongoing Senate blue ribbon subcommittee inquiry into the P2.3-billion parking building.

On lawyer Renato Bondal’s claim that the Binays own a 400-hectare property in Cavite province, the Vice President said this was just the claim of Bondal.

Binay noted that Bondal had also claimed that birthday cakes given by the Makati City government to senior residents were overpriced at P1,000 each. It turned out that the price of each cake was only P309.75.

Bondal was one of the two complainants who filed a plunder complaint against the Vice President and his son, Makati Mayor Jejomar Erwin “Junjun” Binay Jr., over the allegedly overpriced parking building.

Asked whether he was confident that he would pass a lifestyle check, Binay said the question seemed to have a premise that he and his family had “something to hide.”

“Alangan namang sabihin kong hindi kami papasa,” he said, adding that his detractors wanted people to believe things that were not true.

The Vice President said that as a public official, he also underwent lifestyle check.

“So, there is nothing new about their accusations. The only thing new is that they have intensified their vilification against me because I have declared my bid for the presidency,” Binay said of his political foes.

Binay said he would decide soon whether he would attend the Senate inquiry scheduled for Thursday and asked the media to just wait for it.

Told that some people had criticized his address to the nation because he merely gave motherhood statements, Binay said he expected the criticisms. “They did say that for every action, there is a reaction.”

He said he was not dismissing the criticisms, but even if he made those denials there would always be people who would play deaf.

Binay said those speaking against him following the address was part of the “spirit of democracy.”

In the Senate, the Vice President’s daughter, Sen. Nancy Binay, said she had no problem with proposals to subject her family to a lifestyle check since her family’s life was an “open book.”

She said people could examine her father’s SALN that showed the family’s properties and assets. BIR records would also show how much taxes he paid, the senator said.

She said that when President Gloria Macapagal-Arroyo was in power, her family was placed under intense scrutiny in an attempt to bring them down.

“This is nothing new to us,” she told reporters. “It has always been done to us because they wanted to put us in a tight spot.”

Poe said her office communicated its request for a copy of Purisima’s SALN and the police chief had vowed to comply.

Poe said the committee on public order, which she chaired, would scrutinize the PNP chief’s SALN during a hearing on the PNP modernization scheduled for Sept. 30.

“We in the government should be quick to disclose this, especially if there are questions about it. I understand it’s hard to find the SALN of the PNP chief,” she told reporters.

Calls are growing for Purisima to disclose his SALN amid reports that he has several pieces of property that he has yet to publicly disclose.

The police force has come under the spotlight following a rash of crimes involving policemen, such as the Sept. 1 robbery-abduction of two employees of a contractor on Edsa.

The alleged mastermind of the robbery-abduction case, Senior Insp. Oliver Villanueva, declared a net worth of P6.1 million and assets worth P8 million last year despite earning only P605,133 the year before.

By asking for a copy of Purisima’s SALN, Poe said she was not prejudging the PNP chief.

“What’s important is leadership by example, which would erase any doubts. If everything is aboveboard, then there should be no apprehension to show the SALN. We’re not just looking for reforms in the PNP system. The PNP leadership should enjoy the confidence of everyone, including members of the PNP,” she said.

Malacañang has appealed to the public to give the PNP time to implement the lifestyle check for officers and members.

“Let’s give them a chance,” said deputy presidential spokesperson Abigail Valte of concerns whether the PNP probers would take action on members who fail the lifestyle check.–With reports from Leila B. Salaverria, TJ Burgonio and Gil C. Cabacungan in Manila, and Vincent Cabreza, Inquirer Northern Luzon