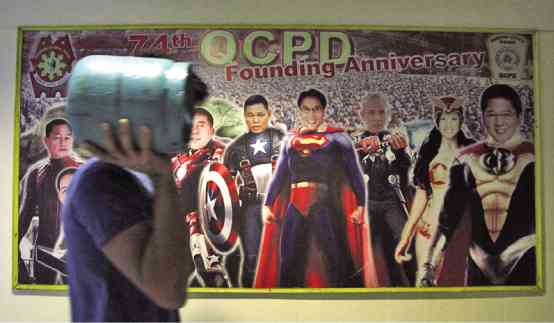 THAT’S JUST SUPER These days when the Quezon City Police District is finding a few “villains” within its own ranks, an old tarpaulin streamer from last year’s QCPD’s anniversary celebration seems to remind people at Camp Caringal that they have no shortage of “superheroes,” with Interior Secretary Mar Roxas donning a red cape and PNP chief Director General Alan Purisima picking up a shield. Can you recognize the other characters? LYN RILLON

Is it wrong for a policeman to be a millionaire?

Not really, except if his monthly pay as a law enforcer could not explain his riches, Interior Secretary Mar Roxas said Wednesday as he disclosed that his department had begun finalizing a policy requiring all members of the Philippine National Police (PNP) to undergo a lifestyle check.

Talk of putting law enforcers under such scrutiny has resurfaced after a spate of high profile crimes saw the PNP investigating its own members as suspects, including a Quezon City policeman tagged as the mastermind of the Sept. 1 Edsa robbery-abduction.

Senior Insp. Oliver Villanueva, who remained at large, was later revealed to have declared a net worth of P6.1 million and assets worth P8 million last year despite earning only P605,133 as policeman the year before.

“Under the law, all riches which are not commensurate to a person’s legal earnings are deemed illegally obtained,” Roxas said in a news briefing at Camp Crame. “We will come up with a protocol regarding the conduct of lifestyle check (for policemen). This will be an objective policy for all police personnel.”

Asked if he was willing to submit himself to a lifestyle check, “Of course. I will not implement that policy if I’m not willing to be part of it.”

The assets of PNP Director General Alan Purisima and other ranking officials of the 148,000-strong police force would be scrutinized, he said.

The DILG chief said he was also consulting with Ombudsman Conchita Carpio-Morales, noting that the government was already implementing the policy at the Bureau of Customs and the BIR.

“If this is being done in the BIR and Customs, why can’t we have it in the PNP?” he said.

Teams composed of personnel from the PNP Internal Affairs Service and the Napolcom would be deployed to check on policemen who could have acquired ill-gotten wealth, he added.

“Initially, we are planning to conduct a lifestyle check on the senior PNP officials randomly. The lower-ranking officials would come next,” Roxas said.

The interior secretary also sought the help of the public in identifying PNP officials involved in criminal activities and who may have used their authority to enrich themselves through illegal means.

Purisima, cops to undergo lifestyle check
Roxas orders PNP inventory to weed out ‘one culprit at a time’
Photo of alleged gun-poking scene on Edsa surfaces on Web, goes viral