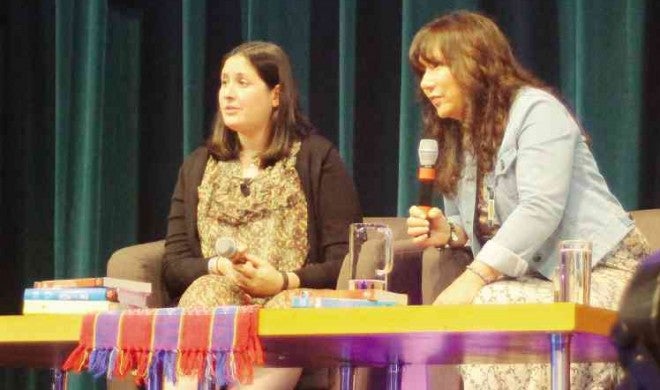 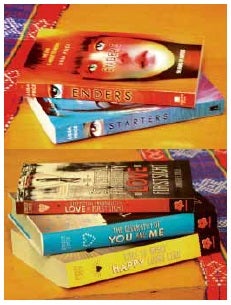 While many writers would name their stories’ characters after loved ones or friends, a best-selling author revealed to her audience at International School Manila (ISM) that she looked to cyberspace for inspiration.

“Baby names on the Internet! I google them,” said Lissa Price, author of the “Starters” series, as the audience laughed and applauded.

Price and fellow novelist Jennifer E. Smith were here recently on a book signing tour. This visit to ISM in Taguig City was organized by National Book Store.

Smith, known for her teen romance novels “The Statistical Probability of Love at First Sight” and “This Is What Happy Looks Like,” also talked about how she wrote her books.

“I don’t write with an outline because I’m a bit of a scatterbrain,” she said. She would write in the form of a script, she said, whenever she experienced writer’s block.

“I write the scenes in dialogues and go back to rewrite them after an hour,” she said.

Both Price and Smith warned ISM students that getting a book published was no easy task. Price described it as a “whirlwind process.”

Before her first book “Starters” was bought by a publishing company, Price said, she had written two scripts that were both rejected.

“But with ‘Starters,’ there were 10 editors who wanted it,” Price said.

When her agent called and asked if she was sitting down, Price knew the news had to be important. True enough, Random House had bought her script.

Price said most novels would usually take about a year to write. Then, through an agent, the story would be sold to a publisher and edited for publishing. The author would receive instructions for the story to be rewritten.

“But why do they buy it if they would just rewrite it? Because that’s how it works,” she said.

With the growing trend in turning young adult (YA) novels into movies, Price said “Starters” was now being made available to film producers.

Asked if they were worried that the film versions might not be faithful to their books, Smith shrugged and said, “The movie [people] may have their own interpretation, the same way readers may have theirs.”

Smith’s “Statistical Probability” is now in production, with Dustin Lance Black as screenwriter and director.

The authors told aspiring writers in their audience, composed mainly of preteens and teenagers, that age was not a factor in writing, especially now with the Internet.

“There are many ways to publish your story online… with Wattpad and blogs,” said Smith, who started writing in her 20s.

Price said she would not recommend writing fanfiction. She was referring to fiction written by fans as an extension of an admired work or series of works by another author. (Fan fiction is usually posted on the Internet or published in fan magazines or fanzines.)

“I just think that it is better that writers make up their own characters and their own stories because then [the work] is theirs and they own it,” she said.

For writers who tend to start and never finish any work, what Price called a “shiny new thing syndrome,” her advice is to write short stories first.

“The ending should be less about you and more about the story and characters,” Smith said.

Asked what they were looking forward to on their visit to the Philippines, Price said, “Meeting our Filipino readers, who kept tweeting us photos of our billboards is No. 1 …. And the next thing, of course, is shopping!”

Smith will soon release her new book, “Hello, Goodbye, and Everything in Between,” in the United States.

Price is currently working on a “secret project” that might just lead to the third installment of “Starters.”

YA novels by Lissa Price and Jennifer E. Smith are available at National Book Store and Power Books.