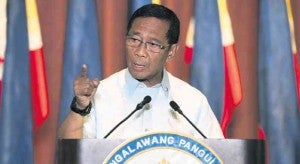 MANILA, Philippines–Vice President Jejomar Binay seems to have preempted the testimony against him by two new witnesses at Thursday’s Senate investigation of alleged corruption involving infrastructure projects in Makati when he was the mayor of the city by releasing on Wednesday his financial disclosures and income tax returns for the last 28 years.

The documents showed that Binay’s net worth was P60 million.

Binay has been invited to the hearing called by the Senate blue ribbon subcommittee investigating the allegations, but he has not said whether he will answer the charges against him under oath.

The Vice President’s lawyers, however, called a news conference on Wednesday and released copies of his financial disclosures and income tax returns for the last 28 years to show that Binay is not scared of a lifestyle check.

The documents were released two days after Binay, who is accused of corruption during his three terms as mayor of Makati, said he was open to a lifestyle check “anytime.”

The Senate blue ribbon subcommittee is investigating allegations that the 11-story Makati City Hall Building II is overpriced at P2.28 billion and that Binay profited from it and that he took 13 percent of the cost of every infrastructure projects in Makati as kickback when he was the city’s mayor.

Binay denied the allegations in a televised address to the nation last week, saying his accusers, including former Makati City Vice Mayor Ernesto Mercado and former city general services division chief Mario Hechanova, had no evidence that would stand up in court.

A group of Makati residents, however, challenged Binay to submit himself to a lifestyle check.

The Senate blue ribbon subcommittee sent an invitation to Binay to attend the hearing set for Thursday and explain under oath what he knows about the construction of Makati City Hall Building II, which is a parking building, and answer the charges leveled by his former officials in Makati against him.

Sen. Aquilino Pimentel III, the subcommittee chair, said Wednesday the panel could do without a testimony from Binay and it was ready to look into allegations that there were other overpriced buildings in Makati built during Binay’s term as mayor.

“Should he decline, we will not have any negative presumption, and we will continue the hearing because we have a lot of clarificatory questions,” Pimentel told reporters.

Pimentel said the subcommittee could wrap up the investigation and write its report even without Binay’s testimony.

“If he doesn’t come, that means he [has no objection to the subcommittee’s writing the] report without his participation,” Pimentel said.

The subcommittee has issued a subpoena for Binay’s son, Makati Mayor Jejomar Erwin “Junjun” Binay Jr., and invited the previous resource persons, including lawyer Renato Bondal, one of the complainants in the plunder case filed against the Binays in the Office of the Ombudsman.

“We will have at least two witnesses who will provide new information as well as corroborate the testimonies of the other witnesses. As to its explosiveness, it is probably on the same level as the earlier hearings,” Sen. Antonio Trillanes IV said in a text message to the Inquirer.

Binay’s net worth as of the end of 2013 is P60 million, having accumulated together with his wife a net income of more than P80 million over the past 28 years since he became mayor of Makati.

Binay’s income came from the flower and piggery he and his wife ran. But since he divested himself of his interest in the piggery business after he was elected Vice President in 2010, Binay now relies on his annual salary of more than P1 million and his wife’s flower shop business for income.

That is according to Binay’s lawyers, who called a news conference where they released copies of the Vice President’s statements of assets, liabilities and net worth (SALNs) from 1988 to 2013 and income tax returns from 1986 to 2008.

Remulla said the financial disclosures were made under oath and Binay was willing to be examined based on the documents.

He said Binay’s properties and lease agreements were proper and the “auditing is on paper and everything is on record.”

In the disclosure for 2013, Binay declared 11 real estate properties worth P13.8 million. These are a house and lot in San Antonio Village in Makati City; another lot in the same subdivision; six residential lots in Muntinlupa, Laguna and Batangas; and three parcels of agricultural land in Laguna, Bataan and Isabela.

How about his children?

Asked whether Binay’s children—Mayor Binay, Sen. Nancy Binay and Makati City Rep. Abigail Binay—would also release their financial disclosures and income tax returns, Remulla said that it was best that they themselves answer that question.

But he said the Binay children were ready to do so since they filed the documents in compliance with the law.

Binay spoke to reporters on Tuesday and said he was not scared of a lifestyle check because he had been regularly filing financial disclosures and income tax returns throughout his life as a public official.

“What is scary is that you don’t file your SALN or you list just anything in your SALN,” Binay said.

On Wednesday, Binay’s lawyer Princess Turgano made a PowerPoint presentation to detail what the Vice President had listed in his financial disclosures and income tax returns.

The news conference was temporarily halted when Turgano became dizzy, which Remulla attributed to jitters, this being her first time to face journalists.

According to her presentation, Binay’s declared net worth in 1988 when he was first elected as Makati City mayor was P2,527,724.85. He had assets amounting to P3.4 million and liabilities of P982,406. At that time, he declared six real estate properties, including his current home in San Antonio Village.

From 1989 to 1991, Binay’s source of income was his salary as mayor but his wife, Elenita Binay, operated a flower shop, Blooms and Bouquet, located at San Antonio Village. She was the sole proprietor of the flower shop.

Binay’s net worth increased by nearly P2 million from 1989 to 1991 when he sold his property in San Pedro town, Laguna province, and added income his wife made from her flower shop.

Binay’s net worth increased to P7 million from 1992 to 1993 from fees for professional services he rendered prior to going into government service.

From 1994 to 2010, Binay earned additional income from his piggery (he put up JCB Farms in Rosario town, Batangas province, in 1994) amounting to P44.35 million. For that period, he paid taxes amounting to P15.88 million.

JCB Farms leased a 9-hectare property in Rosario, making improvements that it reported in its annual audited financial statements and tax declarations.

Binay’s net worth increased to P58 million in 2010 because of the excess contributions of P13,541,711 to his vice presidential campaign.

Aside from the campaign contributions, he also divested himself of his business interests in JCB Farms (for a profit) and investments in corporate stock (at cost), which were declared in his income tax return.

On the excess campaign contributions that were included in Binay’s net worth, Remulla said that when the Vice President filed it there was no BIR ruling for payment of taxes here.

It was only in 2013 that excess campaign contributions were counted as donations, according to the Cavite governor.

“But he is willing to stand up to the BIR if they say they have to pay taxes,” Remulla said.

Based on his 2013 SALN filed in the Office of the Ombudsman, the Vice President has declared P23.78 million cash on hand and in banks and that the P13.5 million in excess campaign contributions were included here.

The Cavite governor also said allegations by Binay’s accusers that he owned a 400-hectare property in Cavite was not true.

Likewise, he dismissed as “urban legend” talk that Binay owns a unit in every high-rise building put up in Makati City.

“You know the Vice President has lived in the same house for 30 years, just one address. Of course, this has been improved out of his accumulated income but he still lives there where he started. He did not move to Dasmariñas, he did not move to Forbes—he is still in Barangay San Antonio,” Remulla said.–With a report from TJ Burgonio