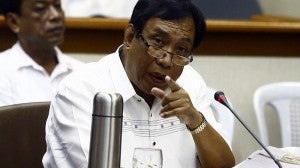 MANILA, Philippines — The new allegations against Vice  President Jejomar Binay validated his decision not to attend  Thursday’s hearing of the Senate on the allegedly anomalous construction of the Makati City Hall 2 parking building, his  spokesman said.

“The supposed documents he presented are far from definitive proof as he alleged,”  Remulla said in a statement,  referring to the  documents that Mercado submitted to the Senate  blue ribbon  committee  involving a lot  in Makati City, among others.

“It is part of a fishing expedition that violates the constitutional rights of private individuals, and validates the position taken by Vice President Binay and Mayor (Junjun) Binay in his jurisdictional challenge that the hearings are not in aid of legislation but are meant to tarnish the reputation of the Vice President and his family,”  Binay’s spokesman added.

Mercado had earlier accused Binay of receiving  kickbacks  when  he was still the  city  mayor.