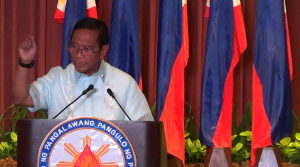 MANILA, Philippines – After the son, can the father be far behind?

Shortly after Makati Mayor Jejomar Erwin “Junjun” Binay said he would not attend the Senate inquiry into the alleged overpriced carpark, his father, Vice President Jejomar Binay also sent word, through a spokesman, that he would do the same.

“Yes and also Mayor Junjun,” said Joey Salgado in a text message when asked if the older Binay would attend the hearing of the blue ribbon committee.

The Binays were invited to attend the 10 a.m. hearing that was investigating allegations of corruption in the construction of the Makati City Hall II parking building.

Salgado said Mayor Binay would send a lawyer to question the committee’s jurisdiction.

The Binays have denied the allegations.