MANILA, Philippines–Vice President Jejomar Binay on Thursday said the charges of corruption against him were “all lies” and testimony on them in the Senate would not stand up in court.

In a televised address to the nation from the Philippine International Convention Center (PICC), Binay said his enemies had no evidence to back their allegations, which he stressed were “hearsay” and “uncorroborated claims.”

Speaking in Filipino in what his aides called in “presidential style,” Binay made it clear that he was a fighter, and vowed to fight the charges his political rivals had leveled against him.

“I’m not new to being put to the test… And every time I am put to the test, I do not turn back or surrender. I always confront it with a fight,” Binay said.

Cheers and applause from his black-clad supporters greeted Binay when he climbed the podium to refute allegations raised at a Senate blue ribbon committee inquiry that he allowed the rigging of biddings for infrastructure project contracts, including the controversial Makati City Hall Building II, and accepted kickbacks from contractors when he was the mayor of the city.

Binay’s family and supporters came in full force, packing Meeting Room No. 5 of the PICC. 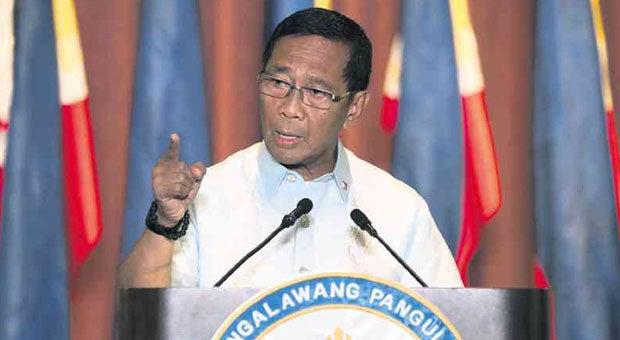 ‘I’M A FIGHTER’ Vice President Jejomar Binay delivers his 20-minute speech that supposedly answered allegations of corruption while he was the mayor of Makati City. RAFFY LERMA

Binay started off with a narration of his life as an orphan raised by an uncle and his perseverance to acquire an education, and eventually realized his goal to become a human rights lawyer who fought the martial law regime of dictator Ferdinand Marcos.

He then went on to trumpet his achievements as mayor of Makati and how his reforms turned the city into a model of good public service.

Binay said the corruption allegations thrown at him by former Makati Vice Mayor Ernesto Mercado and former city general services chief Mario Hechanova were “lies,” giving assurance that under his administration, all city projects went through a government audit and scrutiny.

Without naming them, Binay belittled those who filed the plunder complaint against him, which became the subject of the Senate inquiry, referring to them as people who ran for office in Makati but lost because the residents rejected them.

The complainants in the plunder case filed against Binay in the Office of the Ombudsman are lawyer Renato Bondal and Nicolas Enciso VI.

Binay zeroed in on Bondal, whom he said had claimed that the birthday cakes given by the city government to senior residents on their birthday were overpriced at P1,000 each, but when documents showed the cakes cost only P300 each, Bondal admitted to the senators that the price he mentioned at a hearing was only a guess.

“This person swore under oath to tell the truth, but he was not castigated by the senators,” Binay said.

Responding “point by point” to the allegation that the parking building was overpriced at P2.3 billion, Binay said:

— His accusers’ use of the National Statistics Office’s estimate of the building’s cost was not evidence enough because the NSO had said the estimate should not be used as a basis for the fair cost of the building.

— The accusation that the bidding for the project was rigged was a lie because no documents had been shown or provided.

— The statement of Mercado that he delivered kickbacks to Binay amounting to 13 percent of every project in Makati and that the money was placed in large bags was just the former vice mayor’s claim.

“And like all other statements made in the Senate, no evidence has been shown to prove [Mercado’s claim that he delivered kickbacks to me],” Binay said.

“Therefore, there is nothing in what they are showing as testimony that can stand [up] in a court of law,” Binay declared, adding the allegations against him were being presented just in the Senate.

In rebutting the allegations, Binay said the parking building was built in five years and was paid for with funds allotted by the city council.

Binay said the Commission on Audit (COA) audited the expenses every year for five years.

He said 10 audits were made on the building’s expenses and no irregularities were found.

“But a few senators, with a glance at a construction handbook, a little conversation with paid appraisers apparently, and one promenade in the building, instantly conclude there is overpricing,” Binay said, in an apparent dig on Senate Majority Leader Alan Peter Cayetano, who said at one hearing that the construction handbook should be the basis for city infrastructure projects.

According to Binay, the basis to be used in constructing a government building is the Government Procurement Act and COA regulations and “not a construction handbook.”

Binay also said the head of Hilmarc’s Construction Corp., the contractor of the parking building, had stated in a Senate hearing that he did not ask or was given any bribe for the project.

Bribe only for vice mayor

“If there was a commission said to be collected by the vice mayor, it is very clear that it was only for himself,” Binay said.

Binay also took issue with the way the senators treated his son when the Makati mayor appeared at the Senate hearing, saying they “insulted, ridiculed and ignored his position and mandate.”

He also slammed the way senators lambasted a COA representative who did the audits on the building, accusing the auditor of “incompetence” and “having been bribed.”

Binay insisted that a simple comparison of the parking building with other government buildings like the Iloilo Convention Center would show that there was no overpricing and irregularity in the Makati structure.

He said the price of the parking building was P69,549 per square meter, which is lower than the P74,751 per sqm for the House of Representatives annex building in Quezon City as well as the P105,000 per sqm of the Iloilo Convention Center, which was just in the first phase of construction.

“Why are they saying the Makati City Hall Building II is overpriced when the cost is almost the same as those of similar public buildings?” he said.

But Speaker Feliciano Belmonte Jr. took exception to Binay’s comparison of the parking building with the House annex building, saying the building at the legislative complex in Quezon City was made of “first-class materials” and was “not a garage.”

“This [cannot] be compared with the Makati parking building,” Belmonte said.

Binay vowed to fight the allegations against him, reminding the nation that two administrations had attempted to “silence” him during his more than 28 years in public service, using “their power and all agencies of government to harass me and cow me into submission.”

“But because the truth is on my side as well as with you, my people, they did not succeed,” Binay said.

He said he was being persecuted now by “ambitious politicians who do not want us to extend to the whole country the programs we have introduced in Makati.”

“They do not want us to help the poor—surely because they come from rich families and their attitude and prejudice is to look down on everyone else,” he said.

In trying to rally the nation behind him, Binay directed his plea to the poor, criticizing the Aquino administration for failing to deal with poverty.

He said his fight was for those “who, day in and day out must fall in line to get a ride on the MRT and the LRT, braving the traffic and flood, and going home at night with fear in their hearts because of rampant criminality.”

“They could maul us and insult us left and right, we will always get up and fight,” he said, referring to his detractors.

Binay called on his political enemies to “elevate the political debate” and to “stop lies and character assassination.”

And because the 2016 election is just two years away, the Vice President, who had earlier announced his plan to run for president, called for a clean and fair election and promised that he would continue as Vice President to ensure that the nation would enjoy the same prosperity enjoyed by the residents of Makati.

“We shall fight for a better life for every Filipino,” he said.

Binay and his family left immediately after his speech but his spokesman, Cavite Gov. Jonvic Remulla, stayed behind to answer reporters’ questions.

Remulla said the Vice President wrote his speech and made 20 revisions, the last being an hour before he delivered the speech.

Remulla said he believed Binay was able to explain himself on the allegations against him as well as his “life’s work.”

“He is confident because the people and the truth are on his side,” Remulla said, adding that Binay was confident as well of his chances of winning the presidency despite the controversy.

Remulla also said Binay had not yet decided if he would appear in the Senate inquiry into the scandal.

The Senate blue ribbon subcommittee investigating the controversy has sent an invitation to Binay to attend the next hearing scheduled for Sept. 25.–With a report from DJ Yap