Life after the presidency of Duterte predecessors: VP run not included 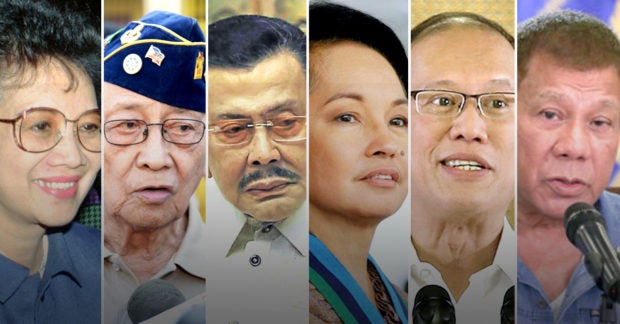 Except that he would be the first Philippine President to do so just in case.

It’s no longer being discussed in whispers and allies of Duterte are now openly talking about his run for vice president. It has started what could be considered as a mystery stage play that revolves around a single plot—will he or won’t he?

Presidential spokesperson Harry Roque has all but categorically declared that his boss was running for vice president next year.

According to Roque, Duterte is awaiting a “message from God” that would be crucial in deciding whether to run for vice president or not.

The President’s colleagues at the ruling PDP-Laban, however, appeared to have received the message from God ahead. They are now openly pushing Duterte into the vice presidential pool and their eagerness is matched only by Palace officials’ neither confirm nor deny position.

As the curtains slowly part to reveal the conclusion of the mystery play on Duterte’s political future, it would perhaps be interesting to take a look at what his predecessors did after leaving the most powerful position in the land. 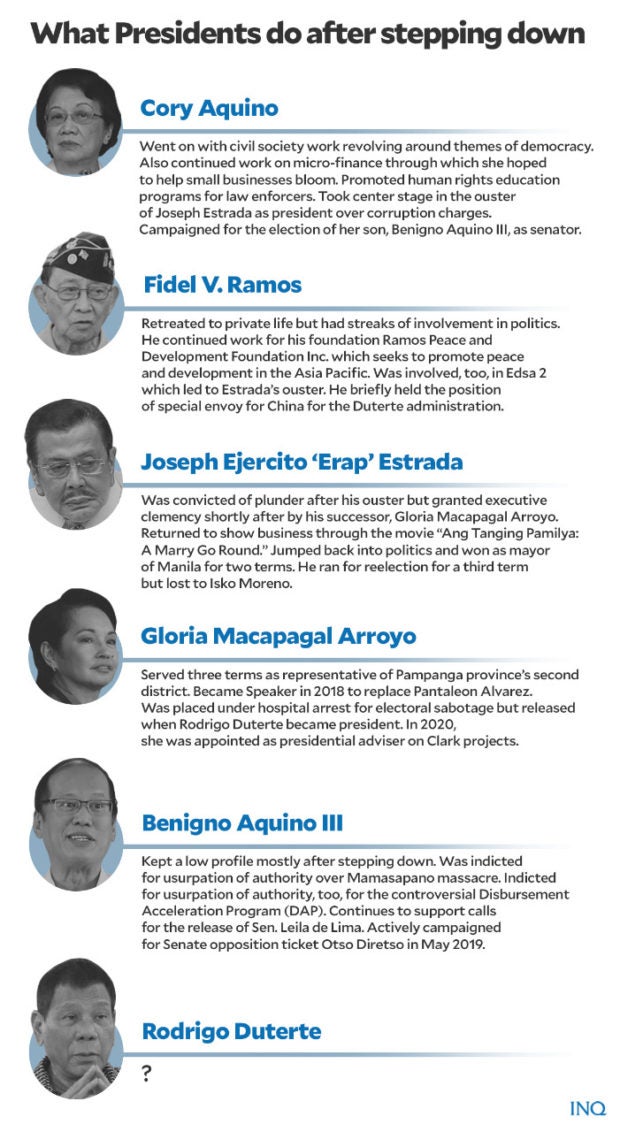 Popular by her nickname Cory, the late Ms Aquino served as the 11th President of the Philippines from Feb. 25, 1986 to June 30, 1992, becoming the country’s first female head of state. A historic upheaval over charges of massive election fraud by the late strongman Ferdinand Marcos paved the way for Cory’s ascent to power.

Cory’s image as an icon of democracy endured after the end of her term.

No longer president, she retreated into private life but carried on with her work and advocacies with nongovernment organizations, mainly the Benigno S. Aquino Jr. Foundation, named after her husband, whose assassination in 1983 was believed to have contributed to the downfall of Marcos.

Cory, as a private citizen who retained a substantial degree of influence, continued supporting human rights education programs for law enforcers. She also busied herself with work for micro-finance institutions and providing scholarship grants to poor, but deserving students.

The foundation named after her husband also launched several symposiums on democratic themes, giving recognition to individuals and groups with exemplary work on promoting democracy.

After her death, the foundation was renamed to Ninoy and Cory Aquino Foundation.

“I always tell my children: ‘I don’t know how many good years I still have left, but whatever I can do at this time, I really want to be able to continue not only for the cause of democracy but also to help in bringing about a better Filipino,” Cory said, according to a profile on her published by the Ramon Magsaysay Award Foundation.

“For the rest of my life, I will be doing whatever I can to improve things.” she said.

Cory did not involve herself only in charity but also in politics when it was called for.

She endorsed the presidential candidacy of the late Alfredo Lim as a Liberal Party standard bearer in the 1998 elections.

In 2000, she joined the Edsa 2 uprising which led to Estrada’s ouster for which she would later apologize, calling her role in the upheaval a “mistake.”

In July 2005, however, Cory would again take center stage by calling for the resignation of then President Gloria Macapagal Arroyo after the now infamous “Hello Garci” tapes purportedly showing election fraud surfaced.

In 2007, Cory actively campaigned for her son in the Senate race.

Former constabulary chief Fidel Valdez Ramos, popular by his initials FVR, took office as 12th President of the Philippines on June 30, 1992 and stepped down on June 30, 1998.

At age 93, Ramos is currently the oldest living former president of the country. Even after his retirement, he remained active in politics.

Ramos, like Aquino, was involved in Edsa 2 which helped install Arroyo as president.

In 2016, Duterte declared that FVR had supported his presidential run.

READ: Duterte tells FVR: Thank you for making me President

In the same year, Ramos accepted Duterte’s offer to become the country’s special envoy to China.

However, three months after accepting the position, Ramos decided to resign after criticizing Duterte’s refusal to ratify the Paris Agreement on Climate Change and Duterte’s tirades against the United States, a long-time Philippine ally in the world stage.

According to its website, RPDEV aims to promote peace and development in the Philippines and Asia Pacific.

RPDEV, said its website, will serve “as a catalyst of constructive change, a medium for fostering unity, stability and progress” and become a “force for mutual understanding.”

FVR was also honorary member of the Boao Forum for Asia, was a senior adviser for Metrobank and honorary president of the Human Development Network (Philippines).

In 2007, years after his ouster, Estrada was convicted of plunder and was sentenced to a maximum of 40 years in prison. He was soon given executive clemency by his successor, Gloria Macapagal Arroyo.

Two years later, he returned to show business and starred in the film “Ang Tanging Pamilya: A Marry Go Round” with comedy actress Ai-Ai deals Alas.

In 2010, Estrada decided to run again for president with Jejomar Binay as his running mate. He finished second in the race and lost to Liberal Party standard bearer Benigno “NoyNoy” Aquino III.

He also decided to sell his residence in North Greenhills, San Juan to fund the construction of Emar Suites, a condominium on Shaw Boulevard in Mandaluyong City.

During the 2013 elections, Estrada and his running mate Francisco “Isko Moreno” Domagoso won and were proclaimed winners in Manila’s mayoral and vice mayoral race.

On March 29, 2021, the former president was hospitalized after he tested positive for coronavirus. He was declared COVID-free on April 13.

Estrada was rushed back to the intensive care unit (ICU) due to a bacterial lung infection. He was discharged a week later.

Arroyo, who served two terms as president of the Philippines, was elected to Congress in 2010 as representative for the second district of Pampanga province.

She underwent a five-hour surgery on July 25. A few months later, she was put under hospital arrest after a Pasay court issued a warrant for electoral sabotage of the 2007 national elections.

In 2013, she successfully kept her seat as congresswoman after winning against Liberal Party’s Vivian Dabu.

Despite being in detention, Arroyo was again reelected to Congress in May 2016. Later that year, after Duterte was sworn in as president, Arroyo was released after four years of hospital detention.

READ: Arroyo thanks Duterte for ‘providing atmosphere that led to her plunder acquittal’

After getting 184 votes, Arroyo in 2018 replaced Davao del Norte Rep. Pantaleon Alvarez and took oath as the new Speaker.

In 2020, Duterte appointed Arroyo as presidential adviser on Clark programs and projects.

Unlike his forerunners, Aquino has maintained a low profile after he finished his term in 2016 and returned to his life as a private citizen.

In February 2017, he attended a protest rally during the 31st anniversary of Edsa People Power Revolution that ousted the late strongman Ferdinand Marcos.

In July 2020, the Office of the Ombudsman indicted Aquino for usurpation of authority and graft over his alleged role in the botched 2015 Mamasapano operation that cost the lives of 44 Special Action Force (SAF) policemen.

The following year, Aquino was charged with usurpation of legislative powers over the controversial Disbursement Acceleration Program (DAP) during his presidency.

In 2019, however, he has made several public appearances starting in March when he campaigned for the opposition Senate ticket Otso Diretso for the May elections.

In November that year, he also attended Mass for the 1,000th day of Leila de Lima’s continued detention.

In December, the former president was hospitalized and admitted to the ICU but was released after a few weeks.