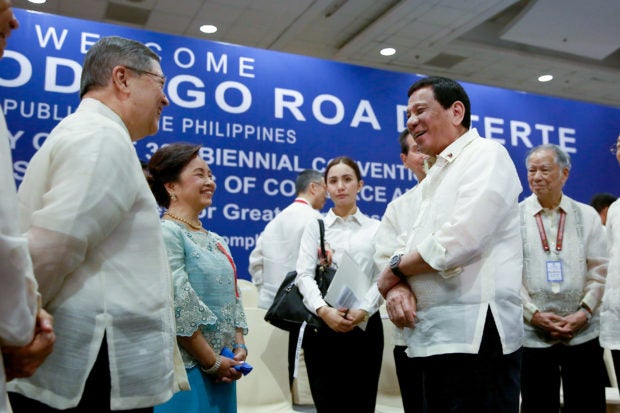 FILE – President Rodrigo Roa Duterte shares a light moment with Finance Secretary Carlos Dominguez III and House Speaker Gloria Macapagal-Arroyo on the sidelines of the 32nd Biennial Convention of the Federation of Filipino-Chinese Chambers of Commerce and Industry, Inc. (FFCCCII) at the SMX Convention Center in Pasay City on March 21, 2019. REY BANIQUET/PRESIDENTIAL PHOTO

MANILA, Philippines — Former Speaker Gloria Macapagal-Arroyo on Tuesday thanked President Rodrigo Duterte for “providing the atmosphere” which led to her acquittal of plunder charges by the Supreme Court.

“Most of all, I thank you that when you become President, you provided the atmosphere in which the Court had the freedom to acquit me of the trumped-up charges my successor and your predecessor filed against me, so that the Court voted 11-4 in my favor, including half of those who were appointed by my accuser,” Arroyo said during her speech at the appreciation dinner organized by her fellow legislators for her.

The Pampanga 2nd District representative, whose term as Speaker expired last June 30, also expressed gratitude to Duterte for allowing her to serve as the leader of the chamber.

Arroyo said her sole regret in her relationship with the former Davao Mayor was her being “difficult to deal with.”

“It was never my intention to be difficult with you,” she told Duterte who was among the audience.

The former President also thanked her colleagues for their “hard work” in the House, and for allowing her to serve as their Speaker.

“I thank God also for giving me a chance to work with some of the brightest and most efficient during my presidency, and also during my speakership; and for the fact that most of them have remained loyal to me, even during the dark times of my life,” Arroyo said.

In July 2016, the High Tribunal acquitted Arroyo of her plunder case in connection with her alleged misuse of funds of the state-run Philippine Charity Sweepstakes Office. This allowed her to walk free from her hospital detention at the Veterans Memorial Medical Center.

In July 2016, the High Tribunal, voting 11-4, acquitted Arroyo of plunder in connection to her alleged misuse of P366 million fund of the state-run Philippine Charity Sweepstakes Office. This allowed her to walk free from hospital detention at the Veterans Memorial Medical Center.

In December 2018, Arroyo won another legal battle under the term of Duterte when a Pasay regional trial court cleared her of electoral sabotage charges. This was in connection with the 2007 senatorial polls where she allegedly ordered then Maguindanao Gov. Andal Ampatuan Sr. to ensure a landslide victory for her senatorial bets.