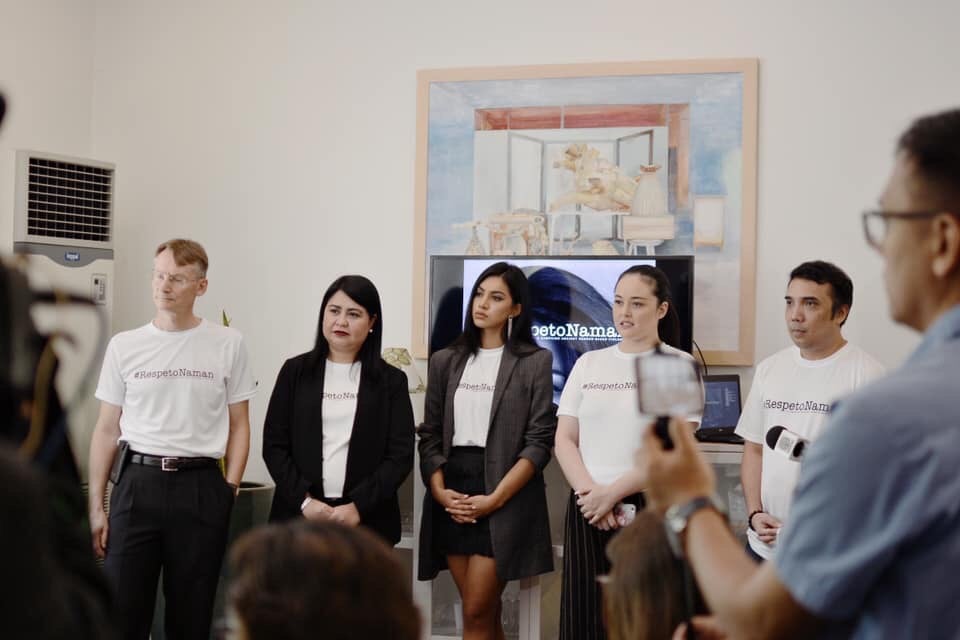 MANILA, Philippines — A campaign that aims to spread awareness on gender-based violence and encourage victims to speak up is expanding its reach to several provinces.

The #RespetoNaman campaign, the highlight of a media discussion hosted by Swedish Ambassador Harald Fries in his home in Makati on Tuesday, aims to enlighten Filipinos on issues concerning gender-based violence.

The campaign calls for better awareness, change in policy, better practices, and rehabilitation of victims to help eradicate this type of violence in the country.

The Embassy of Sweden in the Philippines, together with the Office of the Vice President; UN Women; Spark! Philippines; EMPOWER; Terre des Hommes; Girls Advocacy; and Para sa Sining, launched the #RespetoNaman campaign in 2018.

Kat Alano, founder of EMPOWER, said during the discussion that the movement has since made a difference in many parts of the country.

“Other schools and org[anizations] are creating their own initiatives in line with ours and more victims are feeling brave enough to speak up, reach out to us for help, and even offer their own clothes to add to our campaign. This is huge. This is the #MeToo movement we have so desperately needed in our country,” she said.

The #MeToo movement first made waves in the United States in 2017 and served as a platform for victims to step forward and raise awareness against sexual harassment.

According to Fries, it was in Sweden where the first feminist government was born.

He said “gender equality is a top priority for the Swedish government,” and this is the reason why the embassy has chosen the campaign against gender-based violence.

“They did this…based on the conviction that the world would be a much better place to live in if women enjoyed the same rights, representation, and resources as men,” he added.

The Swedish envoy also said he was surprised that the #MeToo movement had not taken root in the Philippines.

“I’ve had many opportunities to listen to testimonies of victims of sexual abuse (in the Philippines) and these testimonies have really touched me and opened my eyes to see how [the] serious problem of sexual abuse and how prevalent it is in this country,” he said.

“And I know it’s a very serious problem also in my country—where the way the #MeToo movement has exploded and has resulted in new laws in my country,” he added, saying the campaign is one way to push the advocacy.

After the campaign’s run in Metro Manila—where several #RespetoNaman Forums and the “Don’t Tell Me How to Dress Exhibit” will be held —the campaign will be brought to Cebu, Bacolod, Iloilo, and Naga.

The “Don’t Tell Me How to Dress Exhibit” aims to break the stereotype of how a woman’s appearance or behavior is cited as the reason for the assault. Hence, the exhibit features clothes that survivors wore when they were sexually harassed or assaulted.

Barry Guttierez, legal counsel and spokesperson of Vice President Leni Robredo, said the latter had underscored the importance of reaching out to those in the “more remote” parts of the country.

“During the meeting we had last week, one of the things that she attempted to underscore is that moving forward, we should try as much as possible to also reach out, not only to the usual crowd that we actually get to talk to when we hold events in Metro Manila, but more importantly, reaching out to our fellow Filipinos and fellow citizens in the more remote areas of the country,” Gutierrez said.

“As much as possible, we should try to bring this conversation down to the more remote areas, the barangays where the same problems may arise but do not have a similar level of access and exposure to the conversations going on at the national level,” he added. (Editor: Eden Estopace)