Duterte: I ‘killed’ because I thought Arroyo liked it
Close
menu
search

Duterte: I ‘killed’ because I thought Arroyo liked it 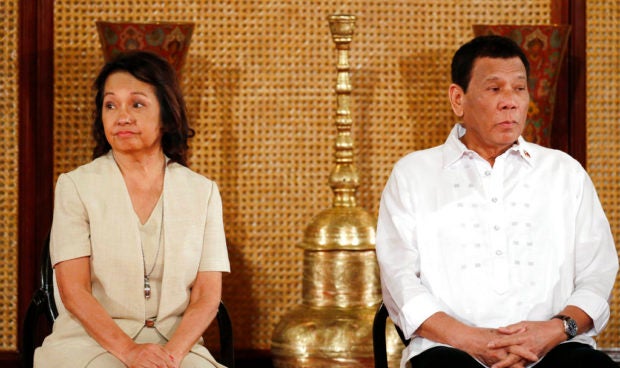 MANILA, Philippines – President Rodrigo Duterte was all praises for former president Gloria Macapagal-Arroyo during the testimonial dinner for the outgoing House Speaker on Tuesday.

Duterte, who was a Davao City mayor when Arroyo was president, described the former chief executive as “the true living icon in Philippine politics and embodiment of strong political will.”

“Perhaps no other chief executive in our history comes close to President Arroyo’s example of carrying out decisive actions even if such actions would prove to be unpopular,” he said in his speech in Manila.

“Indeed, her intuitive and hands-on leadership has carried our nation forward, especially during trying times,” he added.

The President also hailed Arroyo’s “extensive experience as a renowned economist and academic,” which he said “was crucial in laying down the foundations of our country’s steady economic growth during her term, the effects of which are still felt today and will still be felt in the years ahead.”

“During her impressive 27-year career in the legislative and executive branches of government, she became a major figure and was instrumental in crafting policies that made our bullish economy possible,” he said.

Duterte said Arroyo, whom he said was “hard to deal with,” used to call him “in the wee hours of the morning just to listen to me and to seek my advice.”

“I was there when you made the decision, one major crucial,” he said without elaborating. He, however, added Arroyo “did not follow me.”

But before he ended his speech which lasted for less than 20 minutes, Duterte, known for his penchant for cracking jokes and who had been accused of being behind the “Davao Death Squad,” said “I was really working for her,” referring to Arroyo when she was still the President.

“Bilib ako sa iyo, Ma’am, kasi you might want to know that even when I was mayor and for the years that President Arroyo was there, I was really working for her,” he said.