Former President Benigno “Noynoy” Aquino III and Vice President Leni Robredo were among those who attended the 31st anniversary of Edsa People Power Revolution on Saturday.

The protest rally, called “Power of We” was organized by various groups from different sectors not only to commemorate the event, but to also take a stand against the “climate of fear” brought by the unabated killings under President Rodrigo Duterte’s administration.

“For a long time, celebration ang ginagawa natin, ngayon, mas may dagdag na kailangang gawin maliban doon sa paggunita (we would mark it with a celebration. Now, it seems like we need to do more than just remember the revolution),” Aquino said in an interview.

“Siguro paalala sa atin na hindi tapos ang paglaban, tuloy pa rin ang paglaban (Maybe, this is a reminder for us that the fight continues, it’s not done yet),” he added.

Aquino said that despite the invite, he skipped the commemoration event organized by the Duterte administration that was held at Camp Aguinaldo on Friday because he felt a “disconnect” following Senator Leila de Lima’s arrest. 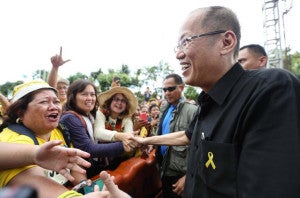 Aquino has maintained a relatively low profile since returning to his life as a private citizen, and this year’s anniversary of the bloodless revolt was one of the few times he was seen publicly after his term ended.

Meanwhile, Robredo said the continued commemoration of the revolution shows that the people have not forgotten its spirit.

(First, I would like thank those who participated in today’s celebration. It shows that at least, after 31 years, we still have not forgotten the spirit and message of the Edsa revolt.)

She urged the people never to forget that the power lies in them.

(I hope we never forget that the people hold the power. Whatever we want to fight for, we can do it if we are united.) IDL