Warrant of arrest served on Arroyo 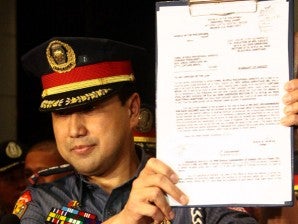 MANILA, Philippines – The warrant of arrest has been served on former president and now Pampanga Representative Gloria Macapagal-Arroyo at the St. Luke’s Medical Center in Taguig City.

Arroyo, who has been charged with electoral sabotage of the 2007 national elections, will be under hospital arrest until she is physically able to move to the Southern Police District detention center where she will be placed under custody, said Senior Superintendent Joel Coronel of the Criminal Investigation and Detection Group (CIDG). Two guards have since been posted outside her room.

The arrest order, which was served at 6:30 p.m. Friday by National Capital Region Police Office Director Alan Purisima, was signed by Judge Jesus Mupas of Branch 112 of the Pasay regional trial court.

In a press briefing after the warrant was served, Coronel said it was Arroyo’s lawyer Jose Flaminiano who received the order although Arroyo was awake.

Coronel said authorities, led by Senior Superintendent James Bucayu, deputy district director, administrative division of the SPD, were about to read Arroyo’s rights when the former leader’s lawyers waived them.

Bucayu added that Arroyo would be given accommodations befitting a former president.

In a statement, the Philippine National Police, through spokesman Chief Superintendent Agrimero Cruz Jr., said: “The PNP will serve warrants of arrest to whomever the court so orders. The local police with the support of the CIDG [Criminal Investigation and Detection Group] implemented the warrants to all the respondents.”

“The PNP will always enforce the law without fear or favour,” according the statement.