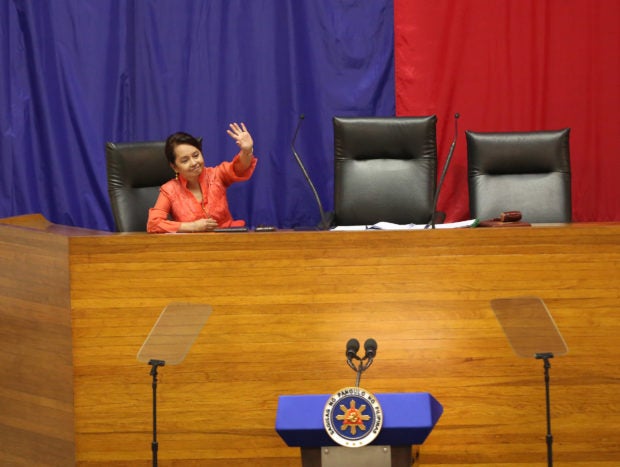 Pampanga Rep. Gloria Macapagal-Arroyo on Monday night wrested the top post at the House of Representatives from Davao del Norte Rep. Pantaleon Alvarez, after a daylong leadership row that delayed President Rodrigo Duterte’s State of the Nation Address to a joint session of Congress.

Arroyo, the country’s former President, was elected Speaker by 184 House members, becoming the 21st leader of the House and the first woman to hold the post.

Ang Kabuhayan Rep. Dennis Laogan, the youngest member of the House in the 17th Congress, administered the oath of office to Arroyo.

Earlier on Monday, half an hour before the President was scheduled to speak, allies of Arroyo tried to install her as replacement for Alvarez, even outside a formal House session.

The attempt at takeover delayed the President’s speech by more than an hour.

Around 5:20 p.m., however, Alvarez emerged still the Speaker.

Alvarez, along with Senate President Vicente Sotto III, fetched the President, who had arrived by helicopter, and led the confused leader to a holding room as the dispute over the House leadership unfolded in the chamber, which was packed with diplomats, legislators and other dignitaries waiting for the President’s speech.

When the joint session began, Alvarez sat to the left of the President as the rightful counterpart of Sotto, seemingly belying the claims of Arroyo’s allies that their coup was successful.

Asked later who the real Speaker was, Alvarez replied: “It looks like it’s still me.”

Monday’s row was the culmination of months of speculation about an impending shakeup to oust Alvarez.

Arroyo’s takeover took place in a muted affair – literally, as the audio was unceremoniously cut just when Deputy Speaker Rolando Andaya announced around 3:30 p.m. that a majority of the House, 161, had voted for the leadership change.

Before the audio was turned off, Andaya, Arroyo’s former budget secretary, was heard saying: “We have 161 members representing the majority of all the members in the House of Representatives. We have the majority of deputy speakers and majority of the committee chairpersons in attendance.”

Andaya also took potshots at the camp of Alvarez for trying to avert the takeover by abruptly adjourning Monday morning’s session.

Arroyo’s attempt to take over actually took place outside of a formal plenary session, since Deputy Speaker Gwendolyn Garcia adjourned the session at 12:30 p.m.

Earlier in the day, Garcia adjourned the session to avert the Arroyo camp’s attempt to declare the position of Alvarez vacant.

The session was adjourned over Andaya’s loud objection from the floor.

The last time a House Speaker was ousted was in February 2008, when Pangasinan Rep. Jose de Venecia Jr. was replaced by Davao Rep. Prospero Nograles.

Sought for comment, Arroyo’s office said that aside from thanking her colleagues, she vowed to carry out President Duterte’s legislative agenda.

The lawmakers resumed session after President Duterte’s address, with Arroyo’s allies pressing the change in leadership.

Arroyo’s support grew during the session, eventually hitting 184 votes to make her takeover official. —With a report from Associated Press

Galvez smarts from remarks people in gov’t are ‘corrupt’