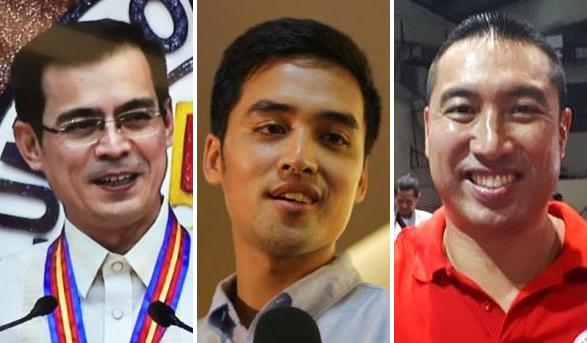 MANILA, Philippines — The mayoralty race Manila, Pasig, and San Juan was among the most closely monitored during the May midterm elections.

Besides being tightly contested, the local elections in those cities got a lot of attention due to the background of the candidates — neophytes going against opponents backed by established political clans.

All three neophytes, however, proved to be winners — Francisco “Isko Moreno” Domagoso in Manila, Vico Sotto in Pasig, and Francis Zamora in San Juan.

All three of them took their oath of office on Sunday, officially starting their reign.

Moreno, however, got a landslide victory over Estrada, the closest candidate behind him by over 100,000 votes.

Of interest is that Moreno was allied with Estrada in the 2013 elections.

Estrada then pledged that he would let Moreno run for mayor in 2016, but he broke that promise. He himself ran for mayor — and won. On the other hand, Moreno opted to run for senator — but lost.

READ: Erap: May 9 elections taught me not to be too trusting

Since then, the two had never spoken with each other, not until Moreno won in the 2019 elections and had “cordial meeting” with Estrada.

In his inaugural speech on Sunday, June 30, Moreno said he would make policies anchored on preserving the rich history of the national capital.

“We will save, we will preserve, we will protect things that remind us of our past for them not to be deleted in our memories. They will not be destroyed,” Moreno said. “These will anchor our tourism, transportation, and environmental policies and projects in Manila to remind us of our heroes, our history and our heritage.”

Moreno took his oath of office at the Bulwagang Katipunan of the Manila City Hall. It was administered by Chief Justice Lucas Bersamin.

Vico Sotto was only 3 years old when the Eusebio clan started taking a hold of the mayoral post in Pasig — the eighth largest city in the country in terms of population.

Fast forward to 2019, Sotto, now 30 years old, ended the reign of the Eusebios when he beat incumbent Mayor Robert “Bobby” Eusebio by over 70,000 votes.

Sotto serves as the youngest among the mayoral candidates that won the recent elections in Metro Manila.

Sotto took his oath of office at the Pasig City Sports Center, just beside the City Hall. His oath taking was administered by Commission on Audit (COA) Chairman Michael Aguinaldo.

In his speech, Sotto admitted that his win did not come easy — not only for himself but also for his family and supporters.

Sotto also called for a stop to the kind of politics that had been creating feuds between city residents.

As for his plans for Pasig, Sotto has one clear message, which he carried over from his campaign: “Iba naman. Iba na nga. Pasigueño naman.”

[Our dream does not stop at changing faces and names in government. What we want is to push for a new government with a culture of openness and transparency — a system under which government officials have accountability, city funds can be checked and are used properly, with a leadership that accepts criticism and embraces the participation of citizens.]

Following the Sotto’s proclamation, Eusebio filed an electoral protest against the neophyte mayor.

Zamora challenged the five-decade reign of the Ejercito-Estradas in San Juan when filed his certificate of candidacy — even though he lost to Guia Gomez in 2016.

With both parties claiming to have the support of the city during their campaign rallies, Zamora emerging victorious with a lead of more than 10,000 votes over Estrada.

Zamora took his oath of office at the San Juan Arena, administered by Sen. Panfilo Lacson.

And what would be his first order of business as city mayor?

Zamora said he would review the policies of the previous administration and realign the budget.

[We need to review all the policies put in place by the past administration. And we will certainly realign the budget. Of course, I would have to realign this so that it could support the projects that I promised our citizens.]

Asked about his relationship with Estrada, Zamora admitted they had not met since the elections.

[The elections are over. The people of San Juan have spoken and this is their decision.]

—With a report from Faye Orellana / INQUIRER.net