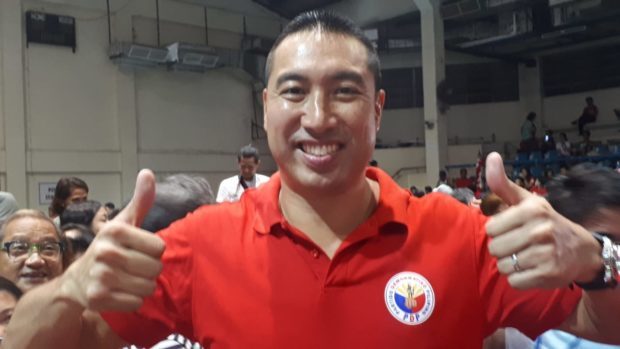 Based on the results from the City Board of Canvassers, Zamora, running under the Partido Demokratiko Pilipino-Lakas ng Bayan (PDP-Laban), led the mayoralty race with 35,060 votes, while his opponent, Janella Ejercito Estrada, running under the Pwersa ng Masang Pilipino (PMP), garnered 24,813 votes.

Even before the official proclamation, supporters of Zamora gathered outside San Juan Gymnasium, where the City Board of Canvassers tallied votes across the city, in celebration of their bet’s impending victory.

Zamora’s father, three-term Rep. Ronaldo Zamora, said his son would bring about the change that their constituents had been longing for years.

“Sa tingin ko nagsalita na ang San Juan at malinaw na malinaw ang sinasabi nila. Basically, they’re saying they wanted change, and we will provide that change with Francis as mayor and with me continuing as a congressman,” the older Zamora told reporters.

[I think the people of San Juan have spoken and what they’re saying is very clear. Basically, they’re saying they wanted change, and we will provide that change with Francis as mayor and with me continuing as a congressman.]

The first transmission of votes came in at 6:42 p.m. with Zamora leading by almost 8,000 votes.

Zamora arrived at the gymnasium with his family and supporters in tow at around 8:50 p.m.

San Juan residents in red shirts filled the place as they waited for the official proclamation which came less than three hours later.

Lawyer Maria Donnah Guia Lerona-Camitan, one of Zamora’s legal consultants, said they had asked the Commission on Elections (Comelec) Project Management Office (PMO) to lower the threshold for proclamation.

Instead of an early proclamation, the city Board of Canvassers opted to have the remaining results from four precincts transmitted for a 100 percent transmission of votes as waiting for the Comelec’s response would take longer.