It was the first meeting between the two former political allies-turned-rivals since the May 13 elections which saw Estrada lose to his former vice mayor.

“Very cordial” was how Domagoso described the private meeting that took place in the mayor’s office at Manila City Hall before the turnover ceremony.

Both held a joint press conference afterward although Domagoso declined to talk about what they had discussed.

“We organized this turnover ceremony to assure our people that the transition process in Manila will be smooth and respectful as it should be,” Estrada said in a speech.

“I have every confidence that Mayor [Domagoso] will do his best for our city. He has drawn up his program of government and I’m wishing him success in making these programs a reality,” he added.

Domagoso told reporters that he wanted to pay a courtesy call on Estrada to ensure a smooth turnover.

The meeting was originally scheduled on Friday last week but Estrada begged off because he was not feeling well. 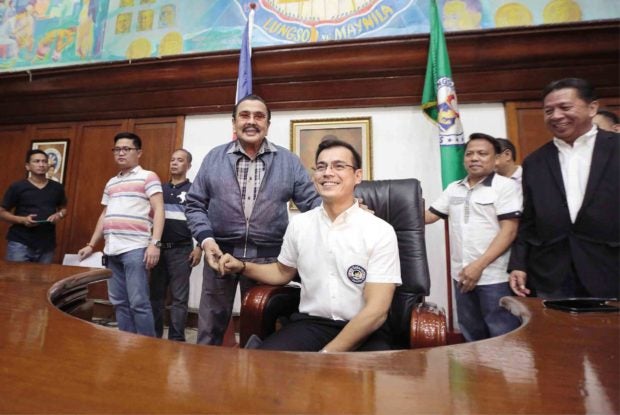 At the joint press conference held at the Bulwagan ng Kagitingan, the two shook hands and smiled for the cameras.

Then Estrada offered Domagoso the black swivel chair reserved for the mayor.

The mayor-elect, who was accompanied by his allies who had also won seats in the city council and Congress, demurred. Eventually, he was prevailed upon by Estrada to sit down although he stood up after a few minutes.

Estrada later reclaimed his chair after delivering a speech in which he discussed his accomplishments during his two terms.

“I will leave Manila in [Domagoso’s] hands but I will leave behind a city that has done very well financially and socially in the past six years,” he said.

Estrada asked his successor to continue his programs, including allowances for residents and financial support for city hospitals and schools.

“I’m hoping that he will continue [to implement] important programs of my administration. I hope he continues the support or exceeds the support given to hospitals, including the dialysis center,” he said.

When it was Domagoso’s turn to speak, he thanked the former president for meeting with him as he promised to serve Manila residents well.

Like Estrada, he called for an end to politics, saying the elections were over.

“We thank you for accepting us in your office and for giving us a warm welcome,” he said.

“This just shows that our incumbent mayor has an open mind [and is aiming for a] smooth transition for the benefit of the residents of Manila,” he added.

Domagoso also sought the help of every employee at city hall even as he allayed their fears that they would be removed from their posts once he takes over.

Asked about Estrada’s plans after June 30, Bambi Purisima, city hall’s public information officer, said that he was planning to go on vacation.