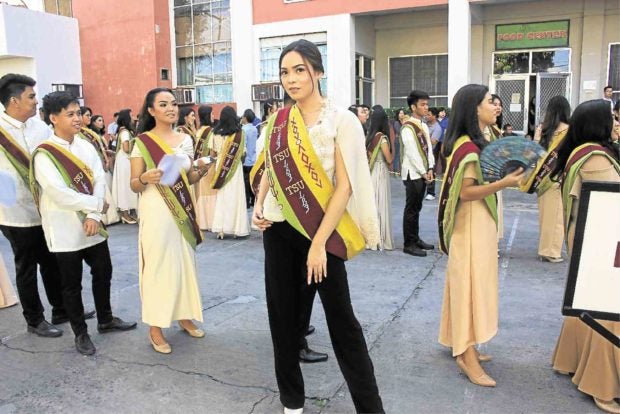 ‘LADY BARONG’ Transgender woman Ivern Doroteo wears a “lady barong” during the graduation ceremonies at Tarlac State University in Tarlac City. She and other transgenders were prohibited from cross-dressing during Monday’s commencement exercise. —JHESSICA FAYE GALANG

TARLAC CITY, Tarlac, Philippines — A communication student who is a transgender woman decided not to risk getting barred from receiving her college diploma on Monday.

Ivern Doroteo, 20, wore the prescribed barong Tagalog for male graduates when she went up the stage for her diploma, but hurriedly changed into an ankle-length dress later.

Doroteo and five other transwomen had earlier been warned by Tarlac State University (TSU) against wearing dresses during its 30th commencement exercises.

Doroteo said that in changing into a dress, she showed her support for fellow transwoman Emmanuel Jejomar Ferrer, an AB English student who chose to wear a dress and was barred from joining the graduation march.

Ferrer, however, was later allowed to receive her diploma on stage despite her defiance of the prescribed outfit for male graduates.

Doroteo kissed TSU president Myrna Mallari on stage, eliciting applause from the crowd. But after leaving the stage, she said the fight was not over: “Hindi pa tapos ang laban.”

Said Antonio “Toni” Gamboa III, a fine arts student who graduated in a separate ceremony on Friday: “We were permitted to wear a ‘lady barong’ but tucked into a pair of pants. President Mallari was amused and told me ‘Kalagu mo ne (You’re beautiful).’ I thanked her.”

Aside from the six transwomen, a transgender man and a lesbian were also warned against defying the dress code for female graduates.

But Jazzel Llaneli Manalo, officer in charge director of TSU office of public affairs, said transwomen were allowed to wear a lady barong and feminine-styled slacks with heels, based on a TSU memorandum order dated May 8, 2019.

“Transwomen were not forced to wear barong and slacks,” Manalo said. “Since they followed the prescribed attire stipulated in the memorandum, they joined the processional and they received their diploma.”

Mallari earlier said the graduating class was consulted about the prescribed dress code and agreed to follow it.

Doroteo said she and other transgender graduates found the dress code discriminatory. “May no one be stripped of their colors for the sake of education. Education is for all, it’s a right and never a privilege,” she said.

De Lima, a former chair of the Commission on Human Rights, said the incident was unfortunate as it happened while the worldwide LGBT community was celebrating the annual “Pride Month.”

“We condemn this move to the highest level because this is a clear violation of their right to free expression,” the senator said in a statement.

“This saddens me because it happened during the celebration of the LGBT Pride Month. Instead of letting students belonging to the LGBT community celebrate one of the most memorable moments of their young lives, they were prevented from fully expressing themselves,” she said.

De Lima, who chairs the Senate committee on social justice, welfare and rural development, is one of the authors of the sexual orientation and gender identity and expression bill, which is aimed at ending discrimination due to sexual preferences.

She also helped in the enactment of the Safe Streets and Public Spaces Act, which was primarily sponsored by Sen. Risa Hontiveros and which lapsed into law after President Duterte failed to act on its ratified version.

“Incidents like this should not happen as members of the LGBT community have rights that must be recognized and respected,” De Lima said. —With a report from Marlon Ramos