Erap: May 9 elections taught me not to be too trusting 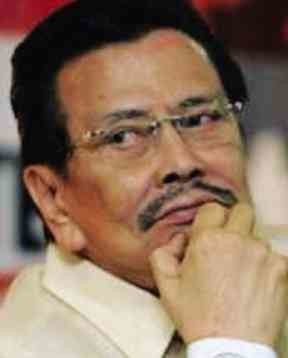 More than a month after the May 9 elections, reelected Manila Mayor Joseph Estrada said on Wednesday that the polls taught him “to not be too trusting,” confirming reports that some of his political allies turned on him during the campaign season, resulting in a close fight between him and rival Alfredo Lim.

Asked by reporters at the launch of the 2016 Miss Manila beauty pageant in Diamond Hotel if one of the alleged turncoats he was referring to was Vice Mayor Isko Moreno, Estrada replied: “I don’t have to identify them.”

There has been talk that the two have not be been on good terms lately because of the issue of turncoatism.

He then proceeded to crack a joke about political butterflies: “Hindi niyo ba alam na wala nang durian sa Davao? Eh kasi puro balimbing na doon!” (Don’t you know that Davao has ran out of durian? It’s because all you can find there now is star fruit!). Balimbing is also a colloquial term for turncoats.

The Inquirer tried to reach Moreno for comment but calls and texts remained unanswered at press time.

After Estrada announced his intention to run for reelection, Moreno ran for a Senate seat in the recent polls but failed to make it to the Top 12. While Estrada’s running mate Honey Lacuna won overwhelmingly over her rivals Councilor Ali Atienza and Rep. Benjamin Asilo, Estrada’s lead over Lim was a slim 2,685 votes.

Estrada earlier said that he would serve just one term as Manila mayor when he first ran in 2013, adding that he would then support Moreno for the post in 2016. However, he later changed his mind, saying he still had a lot of projects he wanted to do for the city.

“I spent the first half of my [first] term repaying Manila’s debt. I didn’t have enough funds and all projects boil down to funding,” Estrada said.