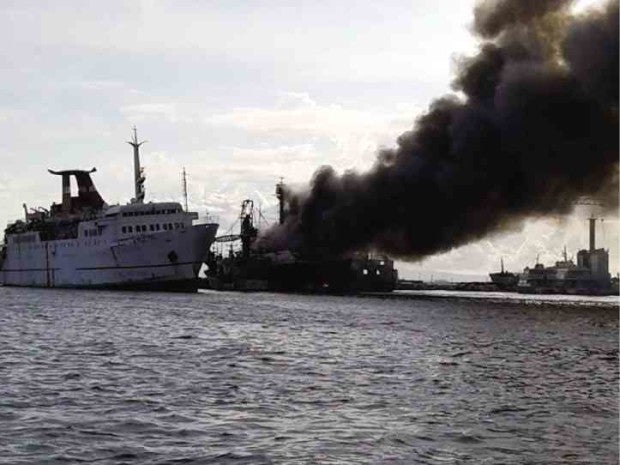 THE “Tobias Reynald Tiangco” goes up in smoke at the Navotas fish port on Monday. BUREAU OF FIRE PROTECTION-NAVOTAS CITY

A fire hit a fishing vessel owned by Navotas Rep. Toby Tiangco while it was undergoing repairs at the local fish port.

Authorities said the fire started Monday afternoon and raged for 15 hours before it was put out Tuesday morning, causing about P50 million in damage. There were no reported injuries.

SFO1 Celso Alivio of the Bureau of Fire Protection’s Navotas office said the boat “Tobias Reynald Tiangco” caught fire at 4:46 p.m. while on a bigger dock ship for repairs and repainting.

The ongoing investigation has yet to pinpoint the cause of the fire and complete an inventory of the items lost in the blaze, Alivio said.

The vessel is reportedly owned by Trans-Pacific Journey Fishing Corp.

According to Tiangco’s resume that is posted on his website, he served as the company’s manager from 1991 to 1994, as executive vice president in 1994 and later as director prior to entering government service.

In 2002 and 2007, two fishing vessels were gutted by fire while undergoing repairs at the Navotas Fish Port Complex. Both incidents were reportedly caused by welding sparks. Jodee A. Agoncillo