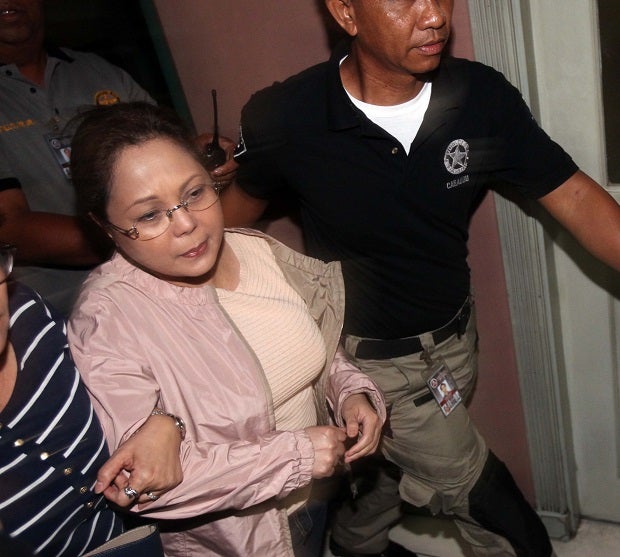 Reyes is insisting on her motion for the inhibition of Tang, whom she says has predetermined her guilt in the pork barrel scam case.

In her reply to the state prosecutors’ opposition, Reyes said her motion against Tang was “not a dilatory tactic” and not “groundless,” but an “availment… of a remedy sanctioned by the Rules of Court and settled jurisprudence which is predicated on solid factual and legal grounds.”

Reyes said there was nothing “irregular” or “questionable” in her bid to have Tang inhibit from her case. She noted that the prosecution had not established that she was benefitting from the delay of the case.

“(T)he prosecution has not alleged, moreso established, any benefit which accused Reyes will gain in delaying the case, considering that she has been, and still is, under detention for the past three years since the Court  ordered her arrest,” Reyes said in her reply.

Reyes maintained that Tang committed grave abuse of discretion and “pre-determined” her guilt when the magistrate penned the resolution that denied the bail application of alleged pork barrel scam mastermind Janet Lim-Napoles.

Reyes lamented that she was a “stranger” in Napoles’ bail application but was implicated in Tang’s resolution.

“(A)ccused Reyes was a stranger to the bail proceedings of accused Napoles… (T)he Honorable Chairperson made specific findings of culpability against accused Reyes involving an incident pertaining solely to accused Napoles’ petition for bail, where accused Reyes did not participate and was not given the opportunity to be heard,” Reyes’ motion read.

In Tang’s resolution, the court said there was no direct evidence to show that then-senator Enrile received the alleged kickbacks from Napoles, but there was “more than compelling evidence” that Reyes received Enrile’s share from the alleged agent Ruby Tuason.

Furthermore, Reyes said the prosecution’s opposition to her motion was silent on Tang’s alleged “inconsistent positions” when the presiding justice “erroneously” ruled that Enrile did not take any action when the prosecution submitted the Bill of Particulars that the former secured from the Supreme Court.

Reyes said Enrile in fact cited the bill of particulars in his motion to quash the information, which Tang even denied.

“In thus taking inconsistent positions and disregarding the established facts on record… the Honorable Chairperson committed grave abuse of discretion,” Reyes said in her motion.

Reyes said Tang placed upon her the burden to prove her innocence even before a trial.

“It cannot hide the glaring fact that the above-cited findings clearly evince that the Honorable Chairperson Tang has prematurely found accused Reyes criminally liable for the offense of plunder charged before trial and virtually placed upon her the onus of proving her innocence before trial,” Reyes’ motion read.

In her motion for Tang’s recusal, Reyes said she also adopted the motion for inhibition that Enrile filed against Tang.

Enrile, the main suspect in the plunder case, hinted that former President Benigno Aquino III’s appointment of Tang as top anti-graft justice might have influenced her decision-making in the pork barrel scam case.

While the Supreme Court allowed Enrile to post bail, Reyes, who was accused of serving as Enrile’s agent, remains detained in Camp Bagong Diwa in Taguig since her surrender in 2014.