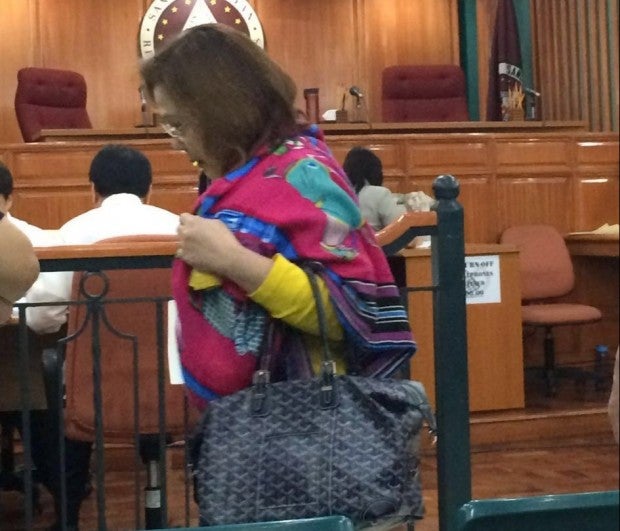 The former chief of staff of Senate Minority Leader Juan Ponce Enrile once complained that her kickback was P500,000 short of what was promised to her, a witness told the Sandiganbayan on Wednesday.

Sula, a property custodian for accused mastermind Janet Lim-Napoles’ corporation, said she once helped Napoles’ finance officer Benhur Luy put money into a box to be received by Tuason.

She added that after Tuason received the money, the latter complained that the money intended for Reyes was short of P500,000.

Napoles broke down into tears when she heard Sula’s testimony.

Meanwhile, an angry-looking Reyes leaned forward stern-faced upon hearing her name in the witness’ testimony.

Sula earlier told the same court in her Nov. 2014 testimony for Napoles’ bail hearing that Tuason went back to Napoles’ office complaining that Reyes’ kickbacks were short of cash.

Then, Napoles then called Sula and Luy to recount the money and they did determine that Reyes’ kickbacks were indeed short, Sula said.

However, Sula said she did not see Tuason personally hand the money to Reyes.

Enrile is out on bail from hospital detention after the Supreme Court considered his petition citing his advanced age and political stature.

READ: While Enrile runs free, Napoles denied bail over ‘pork’ scam
While Enrile was granted bail, Reyes is detained at the female dormitory of the Camp Bagong Diwa in Taguig pending her plunder trial.

In denying the bail of Napoles, the Sandiganbayan in its resolution had taken credence in witness Tuason’s testimony and said Reyes received the kickbacks from Napoles although there is still no evidence Enrile directly benefited from it.

Tuason is the self-confessed agent of Enrile who allegedly met up with Reyes to deliver Enrile’s kickbacks.

Reyes, Enrile’s former no-nonsense chief of staff, had been romantically linked to Enrile. She is considered the 25th senator due to the influence she wields in the Senate. RAM

READ: In The Know: Rumors linking Enrile to Gigi Reyes started in 1998